Blockchain Beyond the Hype 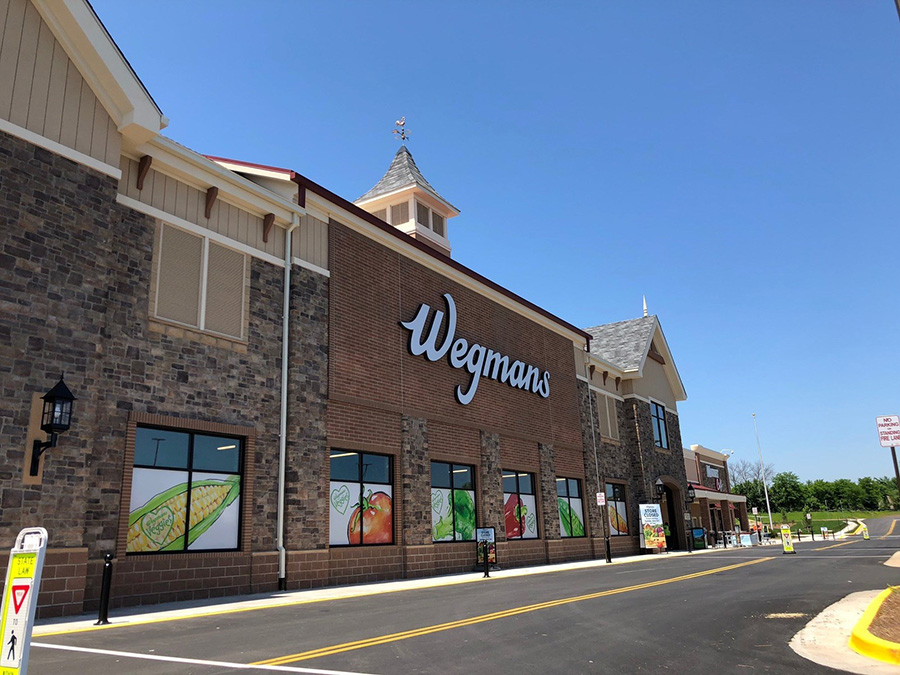 Wegmans, which recently opened a store in Chantilly, Va., has come in first for the third time in Market Force’s annual study
Arguably to no one’s surprise, Rochester, N.Y.-based Wegmans Food Markets has once more been crowned America’s favorite grocer in an annual consumer study of 12,800-plus shoppers conducted by Market Force Information.
Lakeland, Fla.-based Publix Super Markets, which tied with Wegmans for the No. 1 spot last year, was a close second, followed by Trader Joe’s, Aldi and H-E-B. This is the third straight year that Wegmans has come in first in the study, having unseated longtime favorite Trader Joe’s back in 2016.
This year, Wegmans garnered a 77 percent score on Market Force’s Composite Loyalty Index. Publix earned a score of 76 percent, while Monrovia, Calif.-based Trader Joe’s was right behind with 75 percent. Batavia, Ill.-based Aldi moved up a notch from 2017 to capture fourth place with a score of 70 percent, and San Antonio-based H-E-B rounded out the top five by once more earning a 69 percent score. Austin, Texas-based Whole Foods Marketlanded in the middle of the rankings, with 60 percent, but Safeway, a division of Boise, Idaho-based Albertsons Cos. and Bentonville, Ark.-based Walmart were at the bottom, at 42 percent and 34 percent, respectively.
When it came to the six customer-experience attributes most important to consumers, Publix and Wegmans tied for two of them: store cleanliness and item availability. Wegmans once more ranked first for its specialty department service, while Publix led for ease of finding items. Trader Joe’s had the fastest checkouts and scored high for its friendly cashiers, beating second-place Publix in that category by almost 10 percentage points.
Why do shoppers spend the majority of their grocery budget at a particular store?  According to the study convenient location (62 percent) is the main driver, although good sales and promotions (60 percent), and value for money paid (55 percent) are almost as crucial to shoppers.
Salisbury, N.C.-based Food Lion ranked first in convenience, while ShopRite, the main banner of Keasbey, N.J.-based retailer cooperative Wakefern Food Corp., did best in good sales and promotions. Aldi was lauded by its customers for delivering good value for money, in which category it came in first for the eighth year in a row, with Issaquah, Wash.-based Costco in second place and Boise, Idaho-based WinCo Foods third.

“The grocery industry is fiercely competitive,” noted Aldi CEO Jason Hart. “Maintaining the No. 1 position for value highlights our constant commitment to offer customers high-quality food at the low prices they deserve.”

Among the study’s other findings:

Produce Items Still Most Popular Organic Purchases: 49 percent of respondents said they prefer organic when given a choice – down a percentage point from last year – and 93 percent had bought organic produce in the past 30 days, making it the most popular organic item, followed by meat, dairy and packaged dry goods, while baby products and paper products were the least bought organic items.

Meal Kit Services on the Rise: 15 percent of study participants have tried a meal-kit delivery service at least once, up from 11 percent last year, but almost half – 49 percent – were underwhelmed by the experience. When asked why they chose a meal-kit delivery service, 50 percent said they were looking to add variety to their meal planning; other popular reasons included to have a fun experience, save time and try new ingredients.
Berlin, Germany-based HelloFresh dislodged Blue Apron as the most popular meal-kit service, with 39 percent saying that they’ve tried it. New York-based Blue Apron came in second, with 35 percent, while Chicago-based Home Chef lagged far behind, with just 9 percent. However, 83 percent who tried a meal delivery service have stopped using it, an increase from 76 percent in 2017, primarily attributing the decision to poor value, but portion size and cost were also cited. Home Chef again garnered the highest satisfaction rating and the lowest customer churn, as well as New York-based Plated.

“Many supermarket brands are embracing meal kits, and they appear to be making adjustments that address consumers’ misgivings about cost and value. For instance, Costco is now offering Blue Apron kits in some stores for 30 percent less than the subscription cost,” said Brad Christian, chief customer officer at Louisville, Colo.-based Market Force. “While the supermarket industry has offered ready-to-go meals for some time, meal kits in stores is a fairly new phenomenon that we suspect will take off because it gives consumers the convenience they want without locking them into a subscription.”

Tech Use Boosting Grocery Convenience: Use of technology-assisted grocery shopping continued to grow, with more shoppers opting for online ordering and delivery, as well as click-and-collect. 15 percent of shoppers said they’ve used click-and-collect, versus 9 percent in 2017 and 4 percent in 2016. 34 percent described themselves frequent users, employing click-and-collect on at least a monthly basis. Walmart, Kroger, H-E-B and Harris Teeter were the retailers most used in the past 90 days for click-and-collect shopping.
Home delivery services for groceries are also rising in popularity: 22 percent of respondents said they’ve used the service, compared with 18 percent last year. 35 percent said they’re using the service to order from online grocery retailers such as Chicago-based Peapod and Birmingham, Ala.-based Shipt, 34 percent are ordering via general online retailers such as Seattle-based Amazon and Jet (now part of Walmart), and 24 percent get their online groceries from a supermarket chain. One-fifth are still less than satisfied with the experience, however, suggesting plenty of room for improvement.

Circulars Still Important: Despite consumers’ rising use of mobile apps for grocery deals, circulars are still a big deal. While 44 percent of respondents said that that they use a grocery app – up from 39 percent in 2017 – and they’re overwhelmingly using them to get coupons, 84 percent said that they continued to use printed circulars at least weekly, with 14 percent using them a minimum of three times a week. 80 percent said they plan their shopping trips based on the deals offered in the circulars, while 60 percent clip coupons featured in them and 59 percent use circulars to compare prices between stores.