June 16, 2018
With a global trade war increasingly likely, Walmart may be particularly exposed. Most of its suppliers are from China, so products it is importing may be hit by tariffs.
As a low-cost retailer, Walmart may be less able to pass on the rising cost of goods sold to the consumer.
With profit margins already rather thin, it would not take a huge increase in the cost of goods sold to wipe out its profits.

It is true that we are nowhere near an all-out trade war between America and China just yet. At the same time, these things can escalate really fast. It is expected that US tariffs on $50 billion worth of Chinese goods are coming this month. As we saw with recent moves to put tariffs on Aluminum and Steel on US allies, the response can come within days, with counter-tariffs set to be implemented very soon. I expect China’s response will be just as swift if those tariffs will be introduced as has been announced, which will then lead to more US tariffs. Aside from American companies which will be hurt due to counter-tariffs, I think many US retailers can also end up suffering a great deal. Among retailers, Walmart (WMT) is perhaps among the most exposed if this thing spirals out of control.

Walmart is America’s largest importer by far, therefore, it is very reliant on trade relations with the rest of the world, but especially China.

According to the Alliance for American Manufacturing, about 70-80% of Walmart’s suppliers were located in China back in 2016. One does not have to go beyond anecdotal evidence that one can easily gather by simply stepping into a Walmart store to understand just how reliant Walmart is on continued smooth trade relations with China as well as other trading partners.

For the fiscal year of 2018, Walmart had total revenues of $500.3 billion. Its operating income was $20.4 billion. In other words, its operating income margin was about 4%. It would not take much of an increase in costs for it to see a dramatic decline in profits. In fact, profit margins have been on a declining trend for some years now, so it has been under pressure in terms of profitability already. 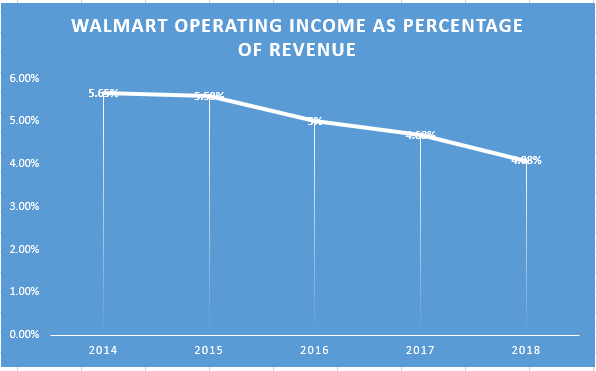 The reason I don’t believe that Walmart would be particularly well-positioned to pass on some of the costs is because it caters to the consumer as a low-cost retailer, therefore, any tariffs on goods it may import from China would likely mostly impact the company’s bottom line. The only remedy it may have would be to switch to other suppliers around the world or pressure Chinese suppliers to further drop their prices, neither of which would help a whole lot in the shorter term. Chinese suppliers are already offering prices meant to compete with emerging lower-cost suppliers from places like India or Indonesia, so there are limits to how low they can go. As for replacing Chinese suppliers, it would take a considerable amount of time to do so for such a wide variety of products that Walmart offers.

We don’t know yet what shape and form this emerging trade war will take. It may be that at some point all sides will pull back and reconcile or perhaps it will just keep escalating, as it recently did during the G7 meeting, where seemingly it all ended on a rather acrimonious note. Cannot help but feel that if trade issues cannot be resolved among members of a G7 meeting, where it was supposed to be a meeting among mostly friendly countries, with deep economic, strategic, and cultural ties, then there is very little chance of US and China resolving their issues. On the other hand, things have become very unpredictable lately, therefore, one can never be sure what to expect in global diplomacy anymore. But overall, at this moment, things are not looking very good for global trade and companies like Walmart that are reliant on that trade as their overall business model.

The Probable Impact Of Higher Cost Of Goods

Given that there has been a trend of declining profit margins firmly in place already, I think that any added difficulties due to tariffs will be an unwelcome factor that will weigh on Walmart’s bottom line. I should point out that it is not all about China either. For instance, the current tensions with Canada can affect Walmart as well. I was surprised when I moved here from Canada how many food products I found in Walmart that were made in Canada. For instance, I found Canadian jam and muffins, beer as well as fish, canned and frozen. There are most likely other items I overlooked. There are also European products, ranging from canned goods to sweets, such as chocolate or cookies. When it comes to such food products, Walmart could simply stop offering these goods if a steep tariff will make them unaffordable, but we should not expect that Walmart will simply replace those sales with alternatives. Some consumers have very particular tastes and are likely to prefer to do without if their choice of preference is not offered.

In the event that Chinese goods, which are mostly manufactured goods will be hit with a steep tariff, some goods can be substituted immediately, others will take some time, while still others cannot be easily substituted. Substitution will also lead to a markup in supplier prices because suppliers from other countries will all the sudden find themselves with more demand which will give them more pricing power. The costliest increase will no doubt come from goods that cannot immediately be substituted, which Walmart will have to try to sell. Here is where Walmart’s business model as a low-cost retailer will give it very little ability to pass on the higher price.

Chances are that a consumer buying a shirt from a high-end retailer for $60, will be almost as willing to pay $70 or even $80 for the same shirt. Such retailers are, therefore, more able to pass on at least some of the costs in the event that supplier prices go up. We should keep in mind that such retailers operate by marking up the price above the cost of the goods sold by a much higher percentage compared with the likes of Walmart. The final cost of a shirt which may retail for $60 in a high-end store will not be as affected as the price of a shirt in Walmart that currently sells for $20. As for the typical Walmart consumers, they will not be as indifferent to a $20 shirt costing $25 or even $30 in the event of steep tariffs, as the high-end consumer will be to their $60 shirt going up in price as mentioned above. Walmart may have to opt for absorbing most of the increased cost of goods it imports from China and elsewhere due to tariffs being put in place in the interest of maintaining sales volumes.

As for the extent of the damage, this could cause to its bottom line, based on the latest quarterly report, its total revenue was $122 billion, while the cost of sales was $92 billion. In other words, every percentage point increase in the cost of sales will cause a .75 point drop in operating profits. Operating income before taxes came in at only $2.8 billion, meaning that operating profit as a percentage of revenue was only 2.3%. In other words, an increase of just over 3% in the average cost of goods sold could potentially leave Walmart with no profits if it were unable to pass on the cost of goods sold. At this point, it is impossible to tell whether Walmart might end up facing such a scenario, but it is within the range of possible outcomes. My current gut feeling is that there is still a better than average chance that a full-blown global trade war will be avoided, with all sides increasingly willing to become more compromising once the prospect of an economic disaster will stare them in the face. At the same time, given the recent on-going development of this situation, the risk of a full-blown trade war scenario is significant enough that it should no longer be ignored, therefore, neither should Walmart’s exposure to it.