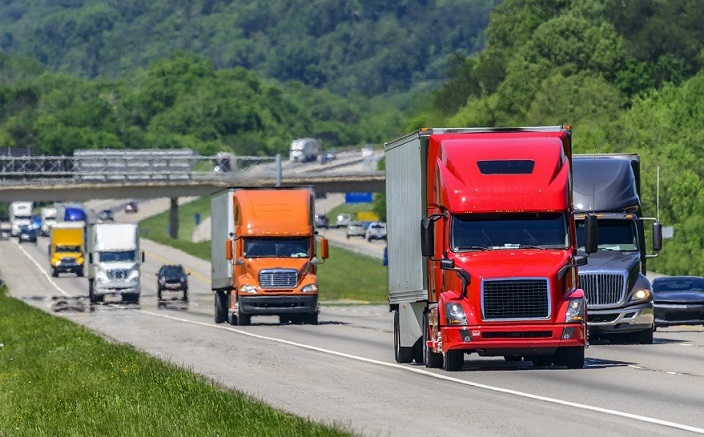 Several factors — expected and unexpected — are increasing US trucking and intermodal costs for shippers in June, and threaten to keep pressure on in July. (Above: Trucks travel in Tennessee, United States.) Photo credit: Shutterstock.com.

After several relatively stable months, US freight demand is spiking in June, squeezing already scarce capacity tighter and pushing up rates faster. Rather than softening in mid-June before climbing before the Fourth of July holiday, freight markets accelerated, propelled by a combination of factors that cumulatively created a market some call “unprecedented.”
Among those factors: the three-day International Roadcheck truck inspection blitz in early June; tight oil pipeline capacity in Texas that is tapping flatbed and tank trucks; a late start to produce season in some areas thanks to a late, wet spring; and strong demand for manufactured goods and services, as reflected in the Institute for Supply Management’s indices for May.
All those factors fall atop truck and rail capacity already strained by higher freight demand and the impact of the US electronic logging device mandate introduced in December.
The uptick in demand has been felt from over-the-road truckload and less-than-truckload carriers to intermodal rail operators and drayage truckers. “May ended with a bang and in June so far, [truckload] contract rates are up 13 cents a mile and [dry van truckload] spot rates 14 cents a mile,” Mark Montague, industry pricing analyst at DAT Solutions, said Friday.

Contract rates up about 11 percent in a year

Contract rates this year are up about 11 percent on average, according to Trans-Logistics Group. “Rates are going up and they’ll continue to go up until you can’t find a box or a trailer, and then you’ll really have to scramble,” said founder and principal Charles W. “Chuck” Clowdis Jr. “This is the strongest market anybody with a memory can imagine.”
The Cass Freight Index for May, released Friday, showed shipment volumes up 11.9 percent from a year ago and 5.9 percent from April, setting the stage for stronger growth in June. The Cass Freight shipper expenditure index was up 17.3 percent year over year and 4.9 percent from April, reflecting the higher prices shippers are willing to pay to get goods delivered.

“This market is unprecedented,” Rob Estes, president and CEO of Estes Express Lines, the largest privately owned LTL trucking company, said at an event in Pittsburgh Tuesday. “This is bigger even than 2004 and 2005.” Those were years when high freight demand and tight capacity fueled frenetic growth eventually checked by the recession of 2008-2009.In both the LTL and truckload markets, “opportunity” exceeds capacity, leading to a spike in rejected freight tenders. “Right now if you look at the sheer amount of turndowns, they’re up much higher than we’ve seen in the past,” Eric Fuller, president and CEO of U.S. Xpress Enterprises, said Thursday. “There’s more opportunity than we can possibly handle.”
Anecdotally, shippers confirm a spike in rejected freight tenders. In an e-mail, one shipper said an LTL carrier had told them a local Northeast terminal was so backed up “they just couldn’t fit in any more trailers, trucks or shipments for the next couple days.” Overbooked LTL and truckload carriers are certainly trying to control the amount of freight flowing through their networks.
DAT’s spot market rates jumped in the week ending June 9, which included the three-day International Roadcheck conducted by state and provincial police and truck inspectors. The US average dry-van spot rate leaped 10 cents to $2.29 per mile, while the average refrigerated spot rate jumped 19 cents to $2.69 a mile. The average flatbed price rose 6 cents to $2.81 per mile.
“Roadcheck was a significant event in the dry van world,” Montague said. The 10-cent-per-mile increase in the national average dry van spot rate was similar to last year’s increase, he said.

Meanwhile, spot rates have surged 26 percent in a year

An analysis of the top 100 US spot truckload lanes showed a marked price hike. Spot rates had been up 26 percent on average year over year entering June, when the differential jumped to 29 percent. “We’re getting back to the peak differential (year over year) in spot rates we saw early in the year,” when rates spiked following the rollout of the electronic logging device (ELD) mandate, Montague said.
Many truck drivers take time off during the inspection blitz, June 5 to 7 this year, which leads to a sudden contraction in capacity and surge in spot market pricing. More freight swings to the spot market as shippers try to find capacity. In the week ending June 9, the number of loads on DAT load boards increased 27 percent while truck posts fell 0.4 percent, Montague said.
“We see strength that will roll into July in the refrigerated and van sector,” he said. “And if oil field construction continues, that will keep flatbed going all through the winter months, when there’s usually a lull.”  Oil production in the Southwest’s Permian Basin in will reach 5.4 million barrels per day by 2023, according to a new forecast by IHS Markit, which owns JOC.com.
Trucks are needed in the Permian to supply pipeline construction projects and to haul oil. “I see nothing but higher rates and increased demand from this sector as we increase production for oil,” Montague said. “Rail comes into play, too but how much do railroads want to invest in transloading facilities and rail cars for a sector that might be gone in 18 months?”
Produce demand is also kicking in after a late start to the year in some parts of the US. Truck rates out of Mexico through the Nogales, Arizona, crossing are up 24 percent year over year basis when combining all destinations tracked by the US Department of Agriculture (USDA). Rate increases from other origin points are similar, a JOC.com review of USDA data finds.
Intermodal drayage demand also spiked in the last two weeks, according to a drayage index and interviews with shippers, truckers, and third-party logistics providers. The Drayage Demand Index — a new industry metric calculated by Gross Transportation Consulting and Drayage.com — rose to 282 in the first week of June, up from a reading of 190 in early May.
Patrick Maher, executive vice president with Gulf Winds International in Houston, said business had picked up in the last two weeks. “The whole region, Texas, Oklahoma, and Arkansas, is seeing this, and then you put this resin boom on top of it. Shippers really need to shore up commitments to their trucking partners now, even if it means longer commitments.” he said.
The surge in drayage demand may reflect faster conversion of freight from highway to domestic intermodal rail. Montague noted that intermodal spot rates tracked by DAT are up 24.8 percent in June. “Rail intermodal usually trailers the spot market,” he said, “we used to have a one-month lag between intermodal and truck pricing, but that’s almost vanished.”
On the highway, U.S. Xpress sees “strong demand” in June, Fuller said. “We had a little bit of a later spring than usual because of the weather. The market was so tight going into April that it maybe didn’t feel so weak. But the late spring definitely impacted our business in April and May.” He believes pent-up demand is overlapping with already strong growth.
Thanks to the convergence of all these factors, July may also be a stronger month for freight demand and trucking and intermodal carriers than usual. “The market has a long way to run and it’s going to last longer than what we’ve seen in the past,” said Fuller. Trucking’s inability to find enough qualified drivers means supply is likely to stay tight as long as the economy expands.