June 27, 2018
Photo courtesy of Thinkstock, charts courtesy of FMIAfter a decade of decline, the supermarket’s role as shoppers’ primary store has stabilized even as shopping trips continue to fragment among more channels of trade, according to the 2018 Trends report issued Tuesday by Food Marketing Institute and the Hartman Group.The report, based on interviews with more than 2,100 U.S. shoppers, shows that the number of channels used by the average shopper continues to grow, but the ongoing fragmentation of the grocery landscape no longer erodes the status of the supermarket as the primary store. Instead, the report said, the supermarket channel today is situated among a greater number of venues that shoppers use “almost every time.”
While the findings indicate good news for a long-shrinking brick-and-mortar cohort, online shopping continues to grow and evolve, only now behind more demographic groups turning to the internet for shopping. While millennials previously drove online expansion, the pace of their adoption is slowing. More Gen X and Baby Boomers are shopping for groceries online, “and for the first time there is a measurable number of users across all generations who report frequent use of online grocery-shopping options,” the report said.

The report also illustrated a shift in consumers think about shopping, with eating, rather than pantry replenishment, driving shopping decisions, and online options evolving to become a “touchpoint” in retail rather than a distinct channel. These trends can also play well for brick-and-mortar retailers as consumers continue to place faith in the channel as a means to fulfill a desire to eat well, and omnichannel offerings can leverage the high-spending online shopper.
Slowing the Decline

Amid the rise of so-called alternative channels such as mass merchants, discounters, clubs and virtual competitors, supermarkets have declined as consumers’ “primary store” for grocery for more than a decade, FMI said, falling from 67% in 2005 to a low of 47% in last year’s report. This year, however, 49% of shoppers identified supermarkets as their “primary store.”

The share once belonging to supermarkets has scattered among several formats. About 3% of shoppers today say organic specialty stores are their primary grocery outlets, vs. just 1% in 2005. Limited-assortment stores have climbed from 1% to 5% in the same period; discount stores from 2% to 3%; and “other channels,” including online, have gone from less than 1% to 4%. About 6% of shoppers say they have “no primary store.”
About 58% of consumers in this year’s survey say they use a supermarket “almost every time” when shopping for groceries, followed by supercenters (25%), mass merchants (15%), limited assortment (10%) club stores (9%), and natural, drug and dollar (5% each). Over a three-year period, supermarkets have lost 1% in this measure, while mass and ethnic (both up by 4%) have gained the most, the data showed. 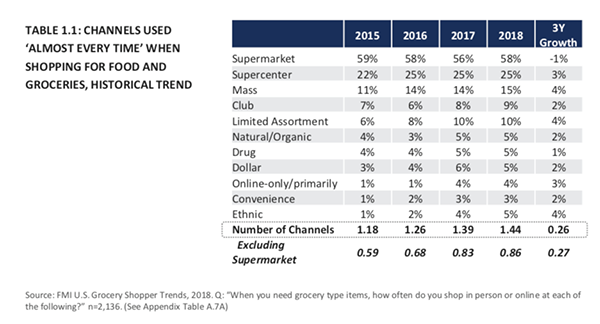 Online Appeal Broadens
The number of shoppers who report using online grocery retailers at least sometimes has nearly doubled over the past three years, from 16% in 2015 to 28% in 2018, FMI said. Moreover, the report indicated, Gen X and boomers are joining the online grocery trend mainly through increasing use of the ship-to-home and online orders for pickup at their local stores. 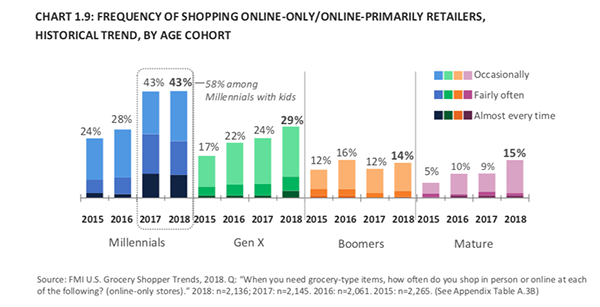 For ship-to-home, which has been the easier entry point for online grocery, Gen X has come close to parity with millennials, with boomers following closely. Millennials, in the meantime, have increased their use of same- or next-day delivery options, widening their pathway toward obtaining perishables online.
These trends point to an evolution of online shopping not as a distinct channel but as a “touchpoint,” poised to benefit supermarkets offering an omnichannel option.
“Online shoppers are more engaged in household shopping, spend more on groceries, make more weekly trips and cross-shop channels and banners more,” the report said. They also use other online food-sourcing options more frequently. “In aggregate, there is no clear evidence that the average shopper’s online grocery orders take away from the total number of trips that this shopper makes to the store, leaving the opportunity for brick-and-mortar retailers to retain a substantial share of these consumers’ wallets through in-person engagement and inspiration.”
Shoppers Need a Compass
The report also illustrated an opportunity for supermarkets to further engage shoppers increasingly influenced by “eating” rather than pantry fulfillment as a motivator for food shopping  – a phenomenon that is leading to an increase in the variety of outlets shopped as consumers pursue personal definitions of wellness and fulfillment from food.
Consumers “shop up and down the spectrum to achieve overall value — individually defined — across the entirety of food sourcing,” the report said.
“Shopping is far more than a way to fill the pantry — it is a learning and inspiration opportunity that shapes what we want to put on our plates and how we want to do it. As such, ‘eating well’ and ‘shopping well’ are two intersecting and symbiotic concepts.”
With “eating well” as the ultimate goal, consumers are considering their needs, pleasures and values in selecting foods and channels to buy them, the study said. “Although some individuals place more emphasis on certain spheres than on others, the idea of eating well is the intersection of all three.” 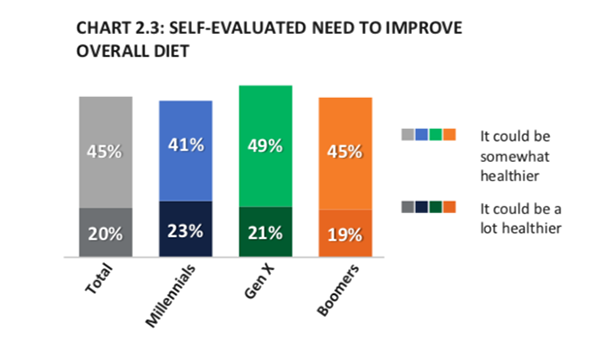 Consumer attitudes around eating well are motivated primarily by their individual perceived health needs, a trend consistent with previous studies, FMI said. More consumers attribute value to locally grown, functional or all- natural foods and beverages than seek organic ones. About 65% of shoppers feel their overall diets could be better, providing “considerable opportunity for companies to help ‘close the gap’ between the ideals and goals people have for eating well and their day-to-day realities.”
This also bodes well for supermarkets, which, according to the study, are trusted by shoppers to be an ally as they pursue better foods.