Lidl USA: What Went Wrong And What It Can Do To Recover

Brittain Ladd , CONTRIBUTOR Opinions expressed by Forbes Contributors are their own. 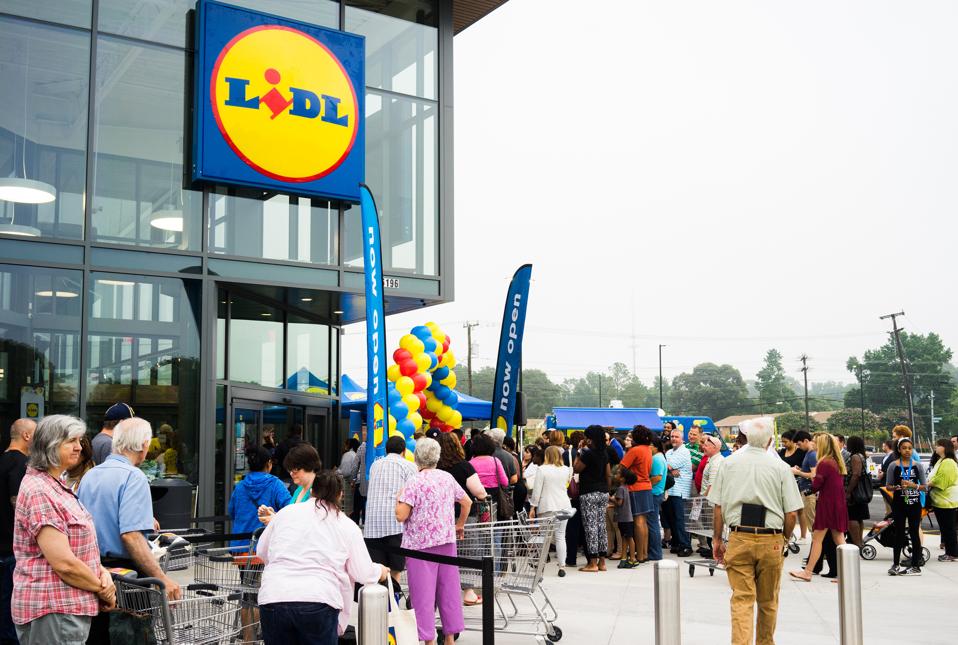 Lidl opened its first stores in June 2017 to much fanfare. One year later, Lidl has failed to live up to the hype surrounding its arrival in the U.S. (Photographer: Benjamin Boshart/Bloomberg)

Aside from Amazon’s acquisition of Whole Foods, few grocers generated as much press and excitement in 2017 than Lidl’s arrival in the United States. Opening its headquarters in Arlington, Virginia, Lidl (rhymes with needle) assembled a team of executives and associates with a promise to convince U.S. consumers to “Rethink Grocery” and to open 100 stores by the summer of 2018. Lidl was viewed as being a potential threat to Kroger, Albertsons, Walmart and regional grocery retailers.
Among the products Lidl stocks in its stores are meat, milk, eggs, dairy, fresh fruits and vegetables, baked goods, beer and wine. These products, referred to as “lines” in the grocery industry, generate over 80% of sales in a traditional grocery store. Grocery executives feared that Lidl would enter the U.S. and within a few short years, establish a position as the low-price leader for the majority of products purchased by grocery shoppers.

One year later, Lidl has opened exactly 53 stores and has failed to achieve anything close to a viable, long-term business strategy capable of threatening any of the incumbent grocery retailers operating in the U.S.
In discussions with senior grocery executives about Lidl, a common theme I heard was shock. Shock that a retailer that operates 10,500 stores in 28 countries, and that has a reputation for being one of the best grocery retailers in the world, would enter the U.S. with such a poorly designed strategy and fail to achieve any semblance of success.

Sam Walton, the founder of Walmart, argued that retailers must open stores in concentric circles around distribution centers (DC) as doing so is the most strategic and cost-effective manner for expansion. Before a new wave of store openings begins, a new DC is built to replenish the stores. Walmart leveraged this process to open thousands of stores in the U.S. alone.
Distribution centers allow a retailer to open stores within a specific radius and then leverage trucks to transport products from the distribution center to its stores. Stores receive the products and then place the items on shelves and/or in coolers and freezers. This is an expensive process if not managed correctly—especially when it comes to the transport and replenishment of fresh food for grocery retailers.

Lidl’s strategy has been to open as many stores as possible in an effort to build its brand and grow the business. Lidl would be wise to place its focus on opening stores around its distribution centers with a goal of opening the maximum number of stores possible in an optimal radius that each distribution center can support. This will allow Lidl to saturate states with stores in an efficient and cost-effective manner.
As a new entrant in the U.S., Lidl should perfect its operations, supply chain, distribution and pricing instead of expanding in parallel in multiple states. Sam Walton’s strategy worked for Walmart, and it will work for Lidl.
Lidl must also evolve and become much more savvy at digital and e-commerce. Grocery retailers in the U.S. have invested heavily in giving customers the ability to order groceries online and have them delivered to their home or apartment. Giving customers choice is a must. Lidl globally, however, is a laggard in online grocery and digital. Lidl U.S. relies on Target-owned Shipt for fulfilling online grocery orders and last-mile delivery but the service is not available in every Lidl store. Digital and e-commerce are areas of opportunity for Lidl.
Lidl must strengthen its foundation in the U.S. or it will be nearly impossible to scale and sustain its operations. Lidl will fail in the U.S. like Tesco. Just as important, duplicating its success in Europe should not be the goal of Lidl for the U.S. Lidl must challenge itself to think bigger in order to differentiate and provide customers with an increased value proposition.
Thinking Big
I have written extensively about the challenge grocery retailers are facing due to Amazon’s acquisition of Whole Foods. As Amazon expands its ecosystem, it will allow the company to attract more customers that will turn to Amazon for groceries.
Amazon has massive purchasing power that is growing at a rapid rate. Amazon can and will drive down prices for food and groceries online and in its stores. Analysts who proclaim that Amazon can “never” beat Lidl or Aldi on price fail to realize how much leverage Amazon can generate to impact a specific category or industry.
Kroger, Walmart and Albertsons are exceptional grocery retailers determined not to allow a new entrant such as Lidl duplicate what Aldi has achieved since it first arrive in the U.S. in 1976. Lidl’s success in 28 other countries does not guarantee it will be successful in the U.S.
Lidl’s discount model is under pressure and facing a future whereby its biggest competitors are willing to sacrifice margins to maintain market share. Remove the price advantage and discounters don’t have much to offer consumers.
In order to succeed in the U.S., I believe Lidl has to change its business model. I believe Lidl has to become much more innovative and unpredictable to its competitors. Lidl has to make a big move that eliminates many of the constraints it is facing with a focus on minimizing the deterrent strategy being leveraged by its competitors.
I don’t presume to have all of the answers for what Lidl should do. However, I do believe Lidl has many options it can consider. For example, Lidl can pursue any of the following strategies to dramatically increase its ability to compete:
Lidl should consider signing a strategic partnership with Target whereby Lidl will open Lidl-branded markets inside applicable Target stores. Lidl can continue to open stand-alone stores where strategic as doing so allows customers of Target and Lidl options for where to shop for groceries.
A partnership with Target will allow Lidl to open stores quickly while leveraging Target’s supply chain and distribution capabilities to replenish products to its stores cost-effectively. Lidl wins as they differentiate itself from its competitors.
Target derives value by attracting more Millennials into its stores (Millennials enjoy shopping at Lidl). Target and Lidl can create a loyalty program that rewards customers for shopping at Target and Lidl; this would generate tremendous value for customers. 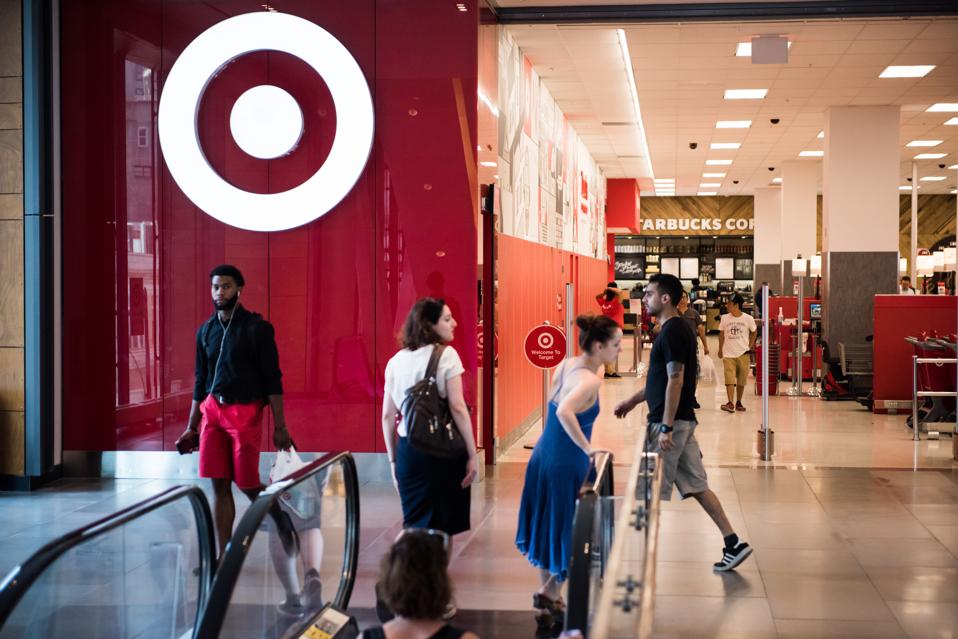 Target continues to struggle in turning around its grocery business. Is a partnership with Lidl the answer? Photographer: Mark Kauzlarich/Bloomberg

Target has exceptional e-commerce capabilities that can be leveraged by Lidl customers. Shipt can deliver groceries and general merchandise to customers of Lidl and Target. In regards to Target’s private label grocery brands (Archer Farms, Market Pantry, and Simply Balanced), Target can divest the brands to Lidl or find another buyer.
As I stated earlier, the products sold by Lidl in its stores generate 80% of sales in a traditional grocery store. Target can shrink square footage and still provide a format for its customers to meet their grocery and general merchandise needs. Lidl and Target would have to work together to identify the optimal store format and assortment.
An option that doesn’t involve Target is Lidl acquiring Boxed Wholesale or forming a strategic partnership. The executive team from Boxed is skilled in digital and e-commerce and has created a powerful online marketplace.
A combined Lidl and Boxed would provide customers the option of buying branded and private-label items in bulk (similar to Costco) and the ability to buy groceries in Lidl stores or order groceries online from Lidl for home delivery. Lidl and Boxed offer customers an exceptional value proposition. It also allows Lidl to significantly differentiate its business model and make it much more difficult for competitors to deter Lidl’s entry.
Finally, I recommend that Lidl evaluate acquiring Sprouts and opening multi-format Lidl Sprouts stores that offer exceptional choice and pricing on vegetables and other items. Sprouts and Lidl are a strategic fit. Sprouts and Lidl are also a lethal combination with the potential to severely disrupt a large segment of the grocery industry. Of the options I’ve assessed, Lidl acquiring Sprouts offers some of the most interesting possibilities in terms of store format and product assortment.
I like the idea of Lidl acquiring Sprouts and/or Boxed Wholesale, as it will give Lidl access to a team of grocery and digital professionals who understand the U.S. consumer and U.S. grocery retailing very well. Tesco failed to understand the difference between grocery retailing in the U.S. and England, and it drove them out of business in America. Lidl has failed thus far to understand the difference between grocery retailing in Europe and the U.S. I see no reason for Lidl to repeat the mistakes of others.
I believe making an acquisition of Sprouts and/or Boxed Wholesale is a wise move strategically for Lidl.
I am confident that if Lidl doesn’t change course, they will exit the U.S. sooner rather than later, and it will harm Lidl’s potential for entering Canada and eventually Mexico and Latin America. Lidl has made a litany of mistakes, many of them self-inflicted.
Lidl is at risk of losing hundreds of millions, if not billions of dollars, over the next three to five years through competitors preventing Lidl from achieving any type of advantage on price. Lidl is vulnerable without scale, and I don’t believe Lidl can scale without innovating and differentiating its business model.
I have been quoted in the press as stating that I believe Lidl is one of the best grocery retailers in the world. In Europe and Asia, that is true. All is not lost, however, for Lidl in the U.S. Lidl can pivot. Lidl can recover. Lidl has the ability to become a dominant and disruptive force in the grocery industry. Lidl just has to be willing to think big to do it. Only time will tell if it can.