Beards Are Growing at Publix

Employees are hopeful as test expands to new regionsBy Jon Springer on Apr. 19, 2018Publix Super Markets has expanded a test that allows male store employees to have beards, a move that comes as competition for workers heats up industrywide and perks from higher pay to new uniforms are being offered to retain and attract staff.
Some stores in at least five Publix divisions have been testing a new facial hair policy that says male workers may wear “neat, clean and professional-looking” beards. The policy in such stores indicates beards should be worn with defined cheek line and neckline, may not exceed 2 inches in length and must be worn with a beard guard for those employees working in food preparation areas.
As reported by WGB, Publix began the test in 10 stores in South Carolina earlier this year. The test has since been expanded to select stores in additional markets including Jacksonville, Miami and Lakeland, Fla., as well as Atlanta, sources said. 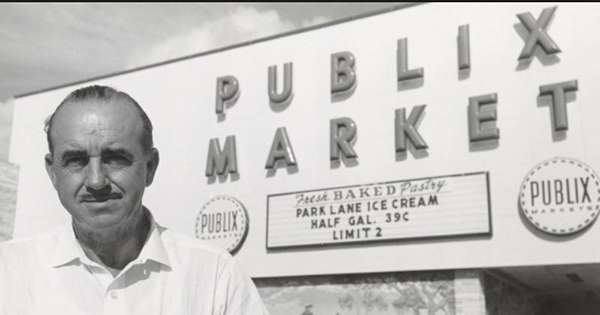 Founder George Jenkins; Photo courtesy of Publix
A company spokesperson in March told WGB the policy was being evaluated and no permanent decision had been made.
Employees have been campaigning for several years to allow beards. Nearly 20,000 workers have signed an online petition started in 2015 by Brandon Wesley, a Publix employee who now works in in a Jacksonville, Fla., store.
Wesley told WGB he was hopeful the intensity of competition in the marketplace would prompt the company to revisit its policies.
“Publix, to me, seems hesitant to appease us and in a sense, rightfully so,” he said. “They are more concerned with the other benefits that employees receive, such as better pay and vacation time. However, small changes like what I am advocating for, and others in the company are as well, go a long way and are just as quintessential to our happiness in the workplace.”
Retailers have been feeling labor pressure as unemployment shrinks and experience becomes a more important determinant of consumer shopping decisions.
Hourly wage and benefit increases have swept the industry in recent months, sparked in some cases by tax reforms that went into effect this year. Publix is among the companies to announce wage and benefit increases this year, while Sprouts, Walmart, Kroger, Target and Natural Grocers have also made announcements.
Fringe benefits such as relaxed dress codes, improved parental leave, educational benefits and the beard policy are also playing into worker satisfaction. Walmart is reportedly testing new dress codes, and Kroger is said to be looking at new dress policies in some of its divisions.
“As the economy continues to grow and the competition in the grocery landscape also intensifies, Publix has to continue to evaluate their workplace rules and perks to be able to hire the best employees to keep the Publix culture going,” Wesley said.  “I have heard from countless could-have-been employees that work at other grocery stores like Whole Foods because they do allow facial hair, and that alone.”