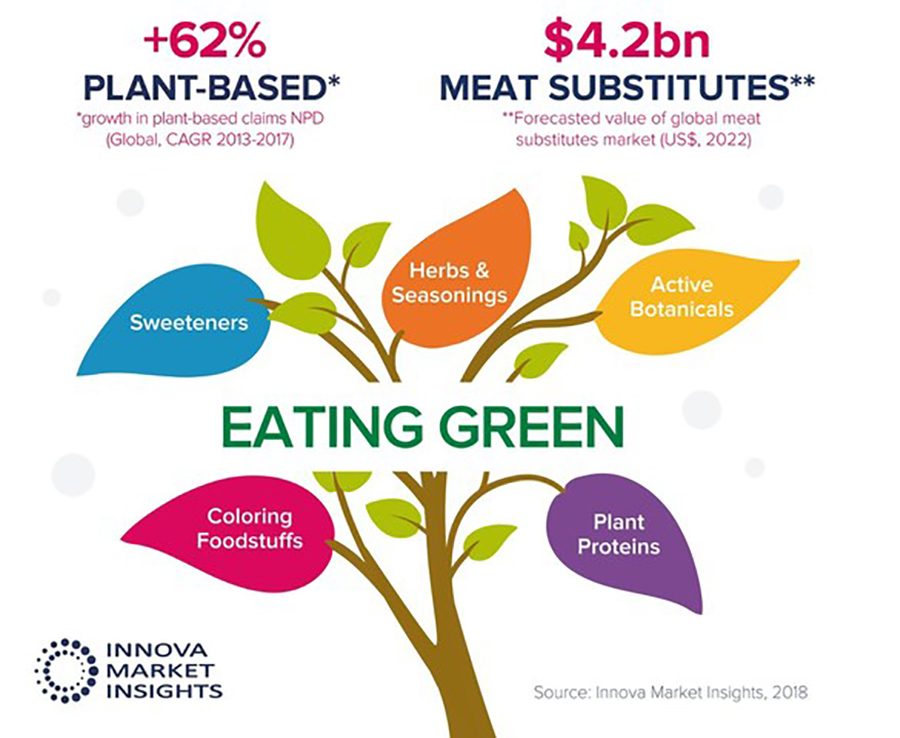 Infographic from Innova Market Insights
Burgeoning consumer interest in health, sustainability and ethics is spurring the popularity of plant-based ingredients and products, according to a report from Innova Market Insights. In fact, Innova, a Dutch knowledge solutions provider for the food and beverage industries, found that plant-based product claims skyrocketed at a compound annual growth rate of 62 percent worldwide from 2013 through 2017, with increases occurring in such areas as plant proteins, active botanicals, sweeteners, herbs and seasonings, and food coloring.

“The dairy alternatives market has been a particular beneficiary of this trend, with the growing availability and promotion of plant-based options to traditional dairy lines, specifically milk beverages, and cultured products such as yogurt, frozen desserts and ice cream,” noted Lu Ann Williams, director of innovation at Arnhem, Netherlands-based Innova.

In keeping with the knowledge that beverages largely spearheaded the dairy alternative category and still dominate it, global sales of dairy alternative drinks are set to reach U.S. $16.3 billion in 2018 and accounted for more than 8 percent of global dairy launches recorded by Innova Market Insights in 2017, up from 7 percent from 2016. Actual global launches have more than doubled over a five-year span.
Spoonable nondairy yogurt has also experienced soaring levels of interest, albeit from a smaller base, with a 48 percent compound annual growth rate for the 2013-17 period taking its share of dairy launches from under 0.5 percent in 2012 to 1.5 percent last year. Innova’s consumer research found that one in three U.S. consumers increased her consumption of plant-based milk/yogurt in the two years preceding the close of 2017.

“In the move to offer something new, we are starting to see an increasing variety of nonsoy plant-based ingredients, including cereals such as rice, oats and barley,” said Williams. “We also noticed an increase in nuts, such as almonds, hazelnuts, cashews, walnuts and macadamias, as well as coconut and more unusual options such as lupin, hemp and flaxseed.”

Interest in plant-based eating has also shaped the meat substitute market, where global sales are poised to grow to U.S. $4.2 billion by 2022. The range of ingredients used for meat substitutes encompasses vegetables and grains, as well as traditional sources like soy and specialty manufactured brands such as Quorn (mycoprotein) and Valess (milk).
A shift toward plant-based diets in general, along with interest in vegan, vegetarian and flexitarian lifestyles and concerns regarding animal welfare, have combined to boost interest in such products, and as a result, new product development has seen an 11 percent compound annual growth rate in 2013-17 period. Innova’s research further showed that four in 10 U.S. consumers upped their consumption of meat substitutes/alternatives in 2017.
Innova will present new data on key consumer trends influencing the industry at the upcoming IFT Food Expo in Chicago on July 16-18.
For more about plant-based products, read the recent blog post about items spotted on the Summer Fancy Food Show floor.