Marks and Spencer My Favourite

Valuation of the company suggests that Metro is currently undervalued, trading at a roughly 3% to 34% discount to its implied value.
Metro has been able to maintain its strong financial fundamentals over the years, which is evident with 23 consecutive years of dividend growth.
The company has been able to adapt with the shifting trends in the industry, which includes pressure from SuperCentre stores and changing consumer preferences.
Metro’s recent acquisition of Jean Coutu will allow the company to diversify revenues outside of low-margin grocery goods.

Metro Inc. (OTCPK:MTRAF) has the opportunity for growth in an industry dominated by a few major players. The company warrants a strong investment opportunity due to its strong financial fundamentals, the ability to keep pace with industry trends and the recent acquisition of Jean Coutu Group Inc.

Metro operates as a retailer in the food and pharmaceutical industry in Canada. The company is the third largest grocer in the country, mainly operating in the provinces of Ontario and Quebec. There are currently 948 locations within the Metro portfolio, which also includes over 200 discount stores under the Food Basics and Super C label.

The grocery industry in Canada is dominated by a few major players, including Metro, Loblaw (OTCPK:LBLCF), Empire (OTCPK:EMLAF) and North West Company (OTC:NWTUF). The industry in the country has seen increased consolidation, as evident with Sobey’s (Empire) acquisition of Safeway Canada in 2013. Growth in the industry stood at an annualized rate of 0.9% from 2010 to 2017, representing slow but steady development. However, there has been increased pressure from ‘SuperCentre’ stores, such as Walmart (NYSE:WMT) and Costco (NASDAQ:COST), as they are better able to drive down prices through lower operating costs and economies of scale. 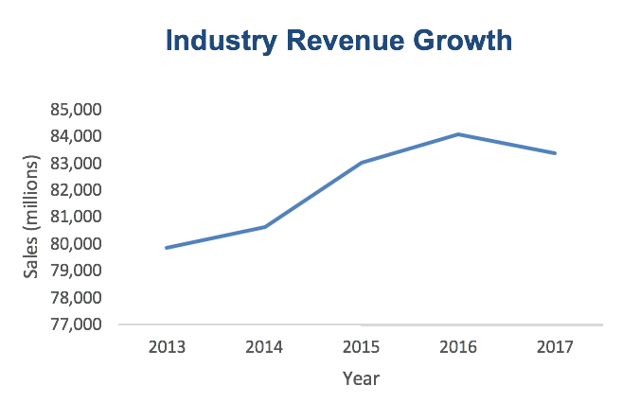 Metro has been able to demonstrate strong financials over the past years, as seen through 23 consecutive years of dividend growth. With best in class ROIC, the company has been able to increase margins in a historically low-margin business. This is evident in gross profit growth at an annualized rate of 2.9%, while sales growth in the same period stood at 1.9%. This demonstrates the company’s ability to reduce costs.

Metro has maintained this commitment to cost-cutting, with the recent investment into WITRON’s OPM (Order Picking Machinery) Technology. This new and modernized supply chain infrastructure will enhance efficiency and “improve service to [our] store network and customers.” Starting in 2021, the Toronto distribution centre will supply over 250 stores in Ontario, and allow the facility to operate at a lower cost. This becomes increasingly important in the wake of the increased minimum wage in Ontario.

As of April 24th, Metro released Q2 earnings. Q2 sales were down 0.1% compared to last year; however, this was due to the time shift of the week before Christmas, which fell in Q1 this year. In accounting for this shift, same-store sales year over year has increased 1%. Sales in the first 24 weeks of fiscal 2018 has seen a 2.3% increase compared to the same period in 2017. As well, the Board of Directors issued a dividend of $0.18 per share in the quarter, which represents a 10.8% increase compared to the same quarter last year.

Metro has been exceptional at moving with recent industry trends. They have been able to adapt to the ‘SuperCentre’ stores by placing an increased emphasis on their discount stores (Food Basis, Super C) and private label brands. A 2014 consumer report from Nielsen found 91% private label penetration in Canada, with 73% of survey respondents finding private labels a good alternative to name brands. Through the sale of private label goods, it helps the company achieve higher margins. The company has also been able to defend against the emergence of online grocery delivery. In 2017, Loblaw partnered with Instacart and Walmart looked to expand their grocery home delivery service. However, the results have not been positive, as PricewaterhouseCoopers found that Canadian shoppers are different than their American counterparts. In a survey, 81% of respondents preferred to shop in the physical store, with preference to the in-store experience. As well, with the lack of population density in Canada compared to the United States, it seems that online grocery delivery will not provide the returns that were originally estimated.

The company has also kept up with changing consumer preferences. The recent healthy food trend has led to the initiative of “My Healthy Plate with Metro.” This initiative of promoting healthy eating has been paired with the company’s ability to offer healthy products at affordable prices with their private label brands, such as Irresistibles Life Smart. Again, this drives private label sales, and higher margins compared to branded products.

The announcement of the acquisition of Jean Coutu Group Inc. for $4.5 billion will allow Metro to diversify and boost revenues outside of grocery products. To fund the acquisition, Metro sold a majority of its shares in Alimentation Couche-Tard (OTCPK:ANCUF) (OTCPK:ANCTF) and issued bonds. With recent authorization by the Competition Bureau, the deal is expected to close on May 11th.

Jean Coutu is a pharmaceutical chain with over 400 stores in Ontario, Quebec and New Brunswick. The company has seen strong sales with 4.7% same-store growth between 2017 and 2018. As well, the company saw a 6.2% sales growth in pharmacy goods in the past year, which is a higher margin category than grocery goods. 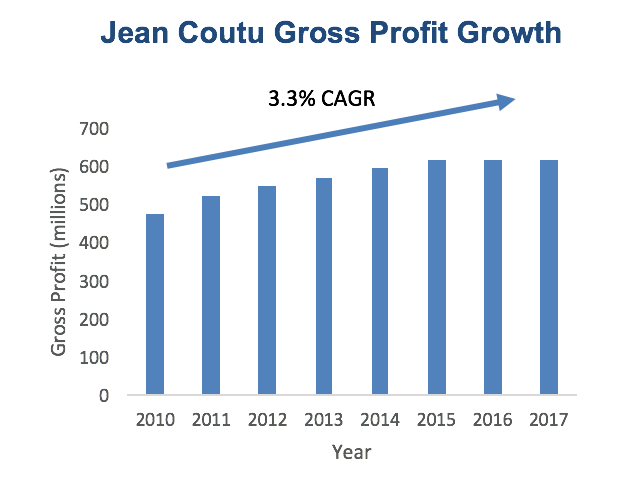 With Jean Coutu’s presence in New Brunswick, it should allow the opportunity for the Metro brand to expand into a new province. As well, this deal is similar to that of Loblaw purchasing Shoppers Drug Mart in 2014. The acquisition should allow Metro to leverage the same synergies through cross-selling, where the company can begin to place grocery goods in these pharmaceutical stores. Additionally, the company should be able to realize operational efficiencies, as Metro has intensive distributions in two of the three provinces that Jean Coutu currently operates in.

In using quantitative valuations, analysis puts the shares between $33 and $43. A discounted cash flow, using both the growth and multiples method, put the share price at roughly $39 and $36, respectively. These implied prices represent a premium between 11 and 21%. It was assumed that combined financial statements with Jean Coutu would occur in FY 2019, seeing a large increase in revenue. As well, a conservative average of 2% revenue growth was assumed for the next few years following the completion of the acquisition. 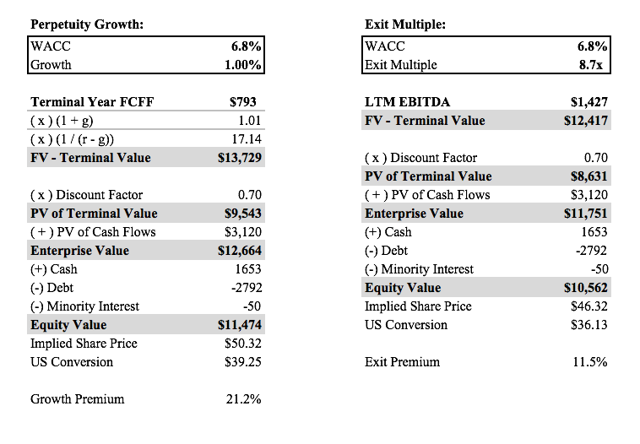 In looking at multiples, Metro looks to be trading similar or slightly below its peer group. Forward EV/EBITDA and P/E multiples put the implied value at roughly $33 and $43, respectively (multiples adjusted for recent majority sale of Alimentation Couche-Tard). This represents a 3% to 34% premium on the current share price. These multiples represent that Metro is currently undervalued in the market.

Growing consumer disposable incomes will lead to increased sales, with an adjusted annualized industry growth rate of 2.2% between 2017 and 2022. However, there is the increased risk of the entrance of new discount retailers, as well as the penetration of SuperCentre stores. In order to compete, Metro must continue to focus on brand loyalty, while placing an emphasis on inventory management and keeping costs low. Equally, they must better cater to health-conscious consumers, who have begun to generate substantial demand for niche and higher-end food products.

Overall, with strong financials and the recent acquisition of Jean Coutu, it presents the opportunity to increase market shares in a growing industry, while reducing risk through diversification. Thus, Metro warrants a buy recommendation, which is enforced by quantitative analysis.