Furious cattlemen see the meat section as their turf, a private reserve of steaks and chops with one thing in common—a butchered animal carcass

By
Jacob Bunge and
Heather Haddon

Staring at the pink, prepackaged burger patties in the meat case of a Kansas grocery store this spring, Larry Kendig felt disgust.
Mr. Kendig, 68 years, was so bothered he took the department manager aside to explain his beef with U.S. food labeling rules: Do shoppers really know what goes into those burgers?

Nothing from a cow. 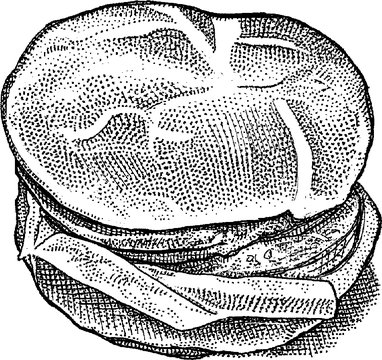 The “Beyond Meat” patties that offended Mr. Kendig were made with pea protein, canola oil, coconut oil, potato starch and “natural flavor.” They’re part of a posse of look-alikes invading meat country—from plant-based burgers that ooze “blood” at first bite to chicken strips grown in a tank from poultry cells.
For thousands of years, meat came from slaughtered animals, and milk was squeezed from cows. Tech-style disruptions are now upending supermarket meat cases and turning the stomach of cattle ranchers like Mr. Kendig.
He and other old-school protein purveyors consider the meat section their turf, a private reserve of steaks and chops with one thing in common—a butchered animal carcass.
American cattle ranchers are dismayed to find the meat replacements sold next to the real thing. “Right in our beef case,” grumbled Mr. Kendig, who raises about 300 cattle near Osborne, Kan. 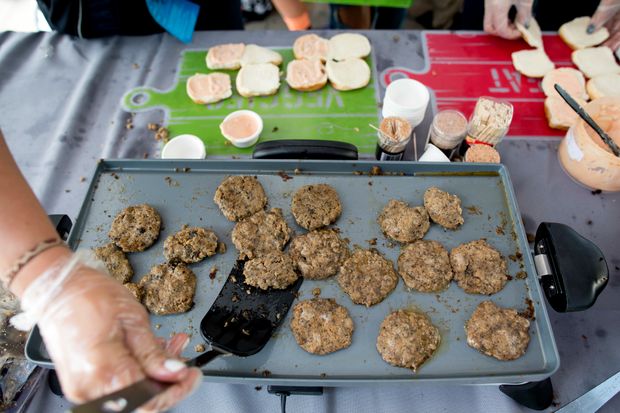 A tray of Beyond Meat’s meatless beef patties. PHOTO: BRIAN HARKIN FOR THE WALL STREET JOURNAL

High-tech startups are building burgers from plant proteins and compounds that grill and taste more like the real thing than old-fashioned veggie burgers.
Other firms are using cell-culture technology to grow animal muscle tissue—otherwise known as meat—in stainless steel bioreactor tanks, similar to the fermentors used to brew beer.
Even dairy cows are feeling the squeeze, with consumer milk sales threatened by an ocean of substitute “milk” made from nuts, peas and oats. The National Milk Producers Federation has protested beverages made from potato, pistachio, duckweed, canary grass seed and other greenery bearing the “milk” moniker.
Cattlemen and dairy farmers are saddling up, and lawyering up, in response. The U.S. Cattlemen’s Association has petitioned the Agriculture Department to bar plant-based products from bearing labels that say “beef” or “meat,” with similar restrictions on meat grown from animal cells.
Missouri this month passed a similar law, and the Good Food Institute, which promotes meat alternatives, plans a legal challenge.
Dairy farmers, meantime, are lobbying the Food and Drug Administration, which supervises milk labels. The milk producers federation is pushing a bill, the “Dairy Pride Act,” to enforce rules that the word “milk” on labels only refer to the output of lactating animals.
Stakes are high for the roughly $200 billion U.S. meat market. Sales of alternative meat products account for less than 1% of fresh meat sales in the U.S. but are growing at an annual rate of 24.5%, according to Nielsen Total Food View. Sales of plant-based “milk” climbed 7% over the past year, while conventional milk sales declined by 4%. 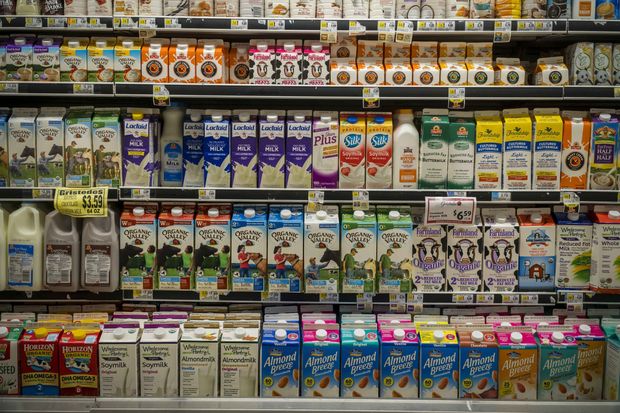 High-tech upstarts say the proposed labeling rules are a poor defense, pointing out that on a molecular level, plant-based meat products can contain the same amino acids, fats and minerals as animal flesh.
“People don’t get angry when you call your cellphone a phone,” said Ethan Brown, chief executive of Beyond Meat.
Jaime Athos, chief executive of the Tofurky Co., which sells imitation tofu-based roasts and patties, objects to any ban on the word “meat” in labels. Consumers hear tofu, he said, and “expect it to be bland or not meat-like.”
To get better exposure, Beyond Meat requires that retailers carry its products in the grocery meat section, rather than the frozen foods case—what Mr. Brown called the “penalty box.”
Alison Pham, 22, of Bokeelia, Fla., is a vegan who sees the realistic looking Beyond Meat patties as a way to get her father to try a plant-based diet. She reaches for the package in the same meat-filled cases she long avoided.
“I don’t look at anything else,” she said.

A Quest for an All-American Burger… Without Meat 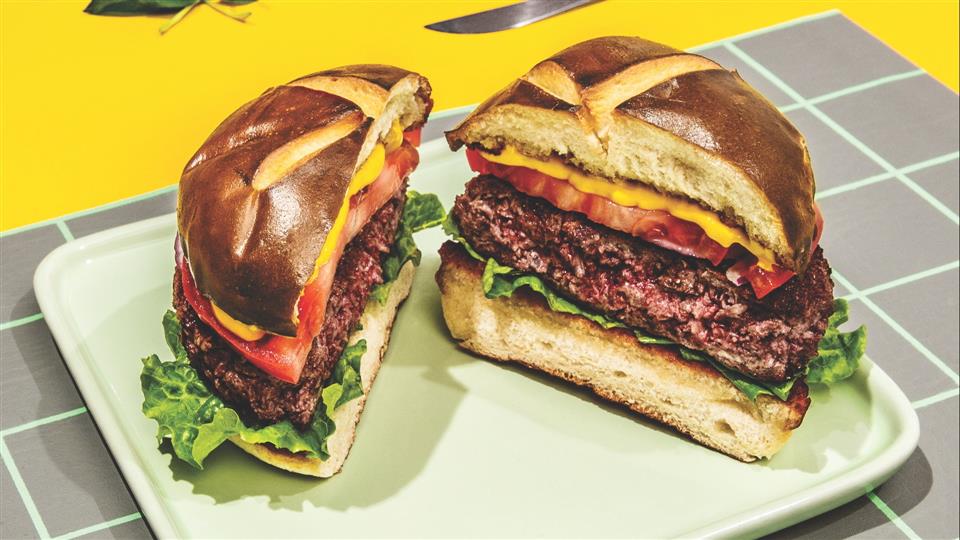 Silicon Valley’s Impossible Foods is on a mission to replace the All-American burger with a plant-based alternative to ground beef — that bleeds. Photo: Stephanie Gonot for The Wall Street Journal

In Washington, D.C., where the food label battle is being waged, industry groups are spending tens of thousands of dollars on lobbying, according to financial filings.
The food fight surfaced in Capitol Hill cafeterias in 2012, when staffers formed the Congressional Vegetarian Staff Association to protest a lack of plant-based offerings on the menu. A “Meatless Mondays” sign, intended to support their goal, drew a letter of protest from meat industry representatives.

Adam Sarvana, a House Democratic staffer who co-founded the vegetarian group, said its ranks have swelled in the years since.
A meat-replacement luncheon hosted by the group last year ran out of Tofurky before the arrival of the guest speaker, U.S. Rep. Ted Deutch, a Florida Democrat.
Mr. Sarvana said the group still battles prejudice, but “the idea we are dirty hippies is played out. The premise is becoming more mainstream and trendy.” 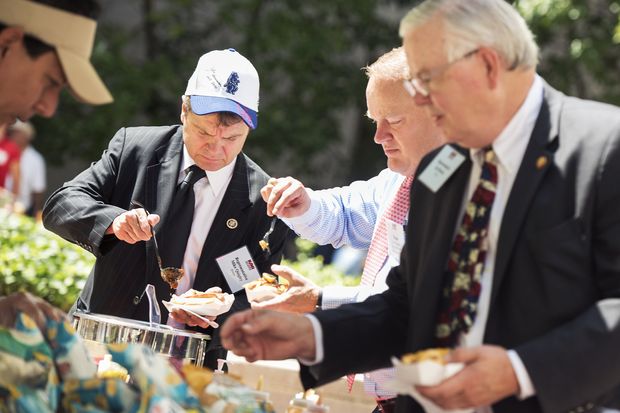 Mr. Sarvana and other meatless Capitol Hill staffers must still contend with the influence of such entrenched protein powers as the North American Meat Institute.
The meat trade group’s annual hot dog lunch, an outdoor event now in its fourth decade, draws more than 1,000 lawmakers, staffers and meat-industry lobbyists. The lunch is so popular, officials said, the group maintains an invitation-only policy and requires a badge for admission.
Missing from the menu are vegetarian hot dogs, said Meat Institute public affairs head Janet Riley. “If it’s made of tofu, it’s a long tubular hot-dog-like food product,” she said, “not a hot dog.”
The midsummer cookout is open to non-meat eaters, Ms. Riley said. “We do serve side salads and cookies.”
Write to Jacob Bunge at jacob.bunge@wsj.com and Heather Haddon at heather.haddon@wsj.com