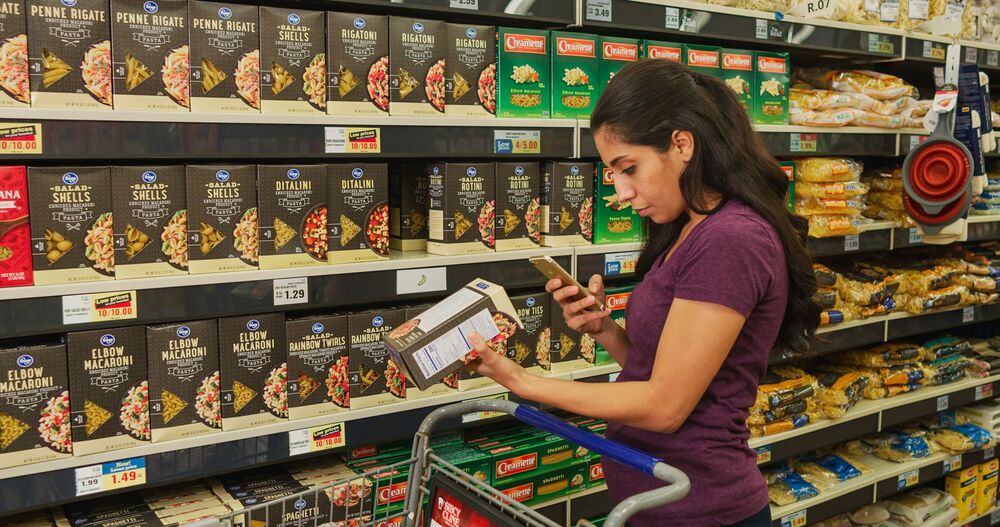 The supermarket chain and technology giant are using the cloud to make it faster to navigate the grocery aisles and pick up online orders.
By Matthew Boyle and Dina Bass
Kroger Co. and Microsoft Corp. are joining forces to bring the ease of online shopping to brick-and-mortar grocery stores.
Kroger, America’s biggest supermarket chain, has remodeled two stores to test out the new features, which include “digital shelves” that can show ads and change prices on the fly along with a network of sensors that keep track of products and help speed shoppers through the aisles. Kroger could eventually roll out the cloud-based system it developed with Microsoft in all of its 2,780 supermarkets.

The alliance is the latest example of how big U.S. retailers are deploying data-rich technology to improve the often-tedious ritual of food shopping and keep pace with Amazon.com Inc., which is bent on grabbing a bigger share of the $860 billion U.S. food retail market. For Microsoft the deal helps grow its cloud business, which lags behind Amazon’s but has found willing customers like Kroger and Walmart Inc. that are loath to line the pockets of Jeff Bezos. Kroger also hopes to sell the technology to other retailers, potentially opening up a new revenue stream with fatter profit margins than selling groceries.

“Together we can create something that, separately, we could not,” Kroger Chief Executive Officer Rodney McMullen said in a joint interview with Microsoft chief Satya Nadella.
The two companies have worked on projects before but deepened their collaboration over the last 18 months. The digital shelving system debuted in the fall and can now be found at the end of the aisles at 92 Kroger locations. At the two test stores, located near Kroger and Microsoft’s respective headquarters in Cincinnati and Redmond, Washington, customers using Kroger’s self-checkout app will be guided through the store to items on their shopping list. When they enter an aisle, the digital shelf will display a personalized icon chosen by the shopper—a  banana, say, or a pumpkin—below the relevant product. 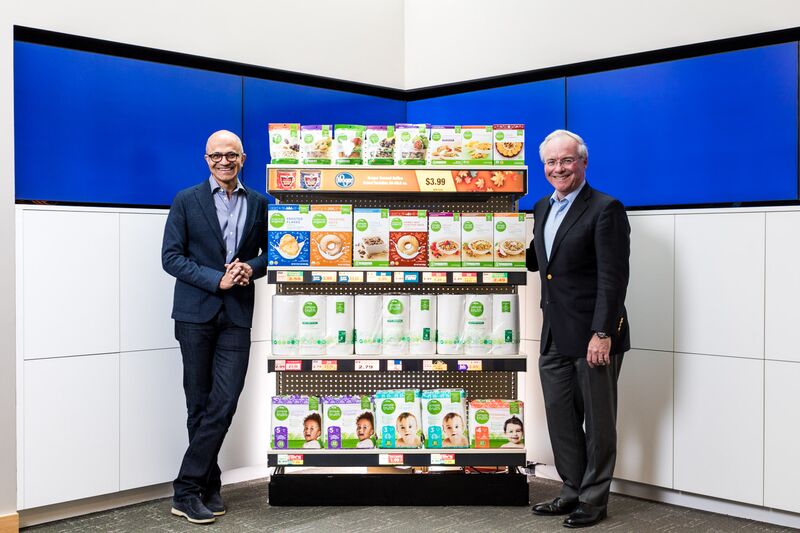 Amazon already grabs about 50 cents of every dollar spent online, but that dominance doesn’t yet extend to groceries, which are still mainly bought in stores. To break into the market, Amazon acquired upscale grocer Whole Foods Market, a deal that sent Kroger’s shares plummeting. The e-commerce king now offers free grocery deliveries from Whole Foods stores for its Prime customers in 60 U.S. cities, and its growing network of cashierless Go convenience stores have also taken a bite out of supermarket sales.
At the test store 10 minutes from Microsoft headquarters, a little more than half of the shelves have been converted into digital displays that light up with a personalized icon when shoppers reach an item they put on the shopping list in the Kroger app. Ellipse-shaped black-and-white devices that look like a cross between a camera and a smoke detector are mounted on ceilings, crunching data and monitoring for out-of-stock items. In a refrigerated meat case, temperature sensors appear every few feet, automatically flagging workers if the case warms up too much, helping prevent  the roughly $10,000 worth of meat inside from spoiling.
The smart shelves light up to help store employees pick orders for Kroger’s curbside grocery pickup service, where customers order online and then later in the day have their bags brought out to their car in the parking lot. The companies say this “pick-to-light” system can cut in half the time required to pick each order, a possible advantage as rivals such as Walmart and Target perfect their own curbside pickup services.
Microsoft artificial intelligence software can predict a shopper’s age and gender, data that will help the likes of Procter & Gamble Co., PepsiCo Inc. and Kraft Heinz Co. tailor ads to  particular customer segments. Kroger also plans, with a user’s permission, to more specifically target products and ads to a shopper’s preferences, highlighting products for gluten-free eaters, say. Video trailers for upcoming Hollywood movies could also be part of the advertising mix.
Kroger isn’t the first big retailer to entrust valuable data and tasks to Microsoft’s Azure cloud service. Microsoft has also signed up the likes of Macy’s, Walmart and European grocer Ahold Delhaize, which would prefer not to pay Amazon for critical technology.
But what’s unique about this tie-up is Kroger’s plan to sell the technology to other retailers; several are already testing it. The revenue could help Kroger meet a pledge to generate an additional $400 million in operating profit by the end of 2020, a plan that includes remodeling stores, revamping product assortments and boosting online efforts. Kroger’s technology investments also include robot-filled warehouses and unmanned grocery deliveries.
Kroger’s plan to commercialize its futuristic shopping experience could provide a lift to Microsoft’s Azure cloud business, which is critical to Nadella’s ongoing efforts to reinvent the software pioneer. The Kroger pilot makes use of several types of Microsoft cloud technology, including the ability to analyze data generated by a host of sensors spread through the store. The two companies are also working on a Virtual Store Manager, which would alert the human store manager when, say, there aren’t enough shopping carts for customers at the front of the store.
In an effort to speed up the consumer experience, the data crunching could be divided between Microsoft server farms and the stores themselves—using those black-and-white devices on the ceiling. The grocery applications also make use the “hybrid cloud,” which combines customers’ corporate data centers with Microsoft’s own. Microsoft’s efforts in the hybrid cloud space has given it bragging rights over Amazon, which unveiled a significant new effort late last year.
In the interview, Nadella said the technology will help shoppers find food in the “most seamless way” and hopefully inspire other grocery chains to adopt it in their own stores. “It’s not just about Kroger,” he said.