By Kat Martin – 05/08/2018
If the United States exits NAFTA (North American Free Trade Agreement), the near-term cost to retailers would be a nearly $15.8 billion loss, according to the study “How NAFTA Affects U.S. Retail,” released by global strategy and management consulting firm A.T. Kearney in partnership with Food Marketing Institute, the National Retail Federation, and the Retail Industry Leaders Association.

“The three macro areas we researched were tariff increases, reduced consumer spending, and lost jobs, each and collectively amounting to losses of billions of dollars and displaced lives,” said Johan Gott, A.T. Kearney principal and co-author of the study. “Retailers in different sectors would be affected in different ways — even from product to product. But bottom line, the impact will extend to millions of products imported into the U.S.” 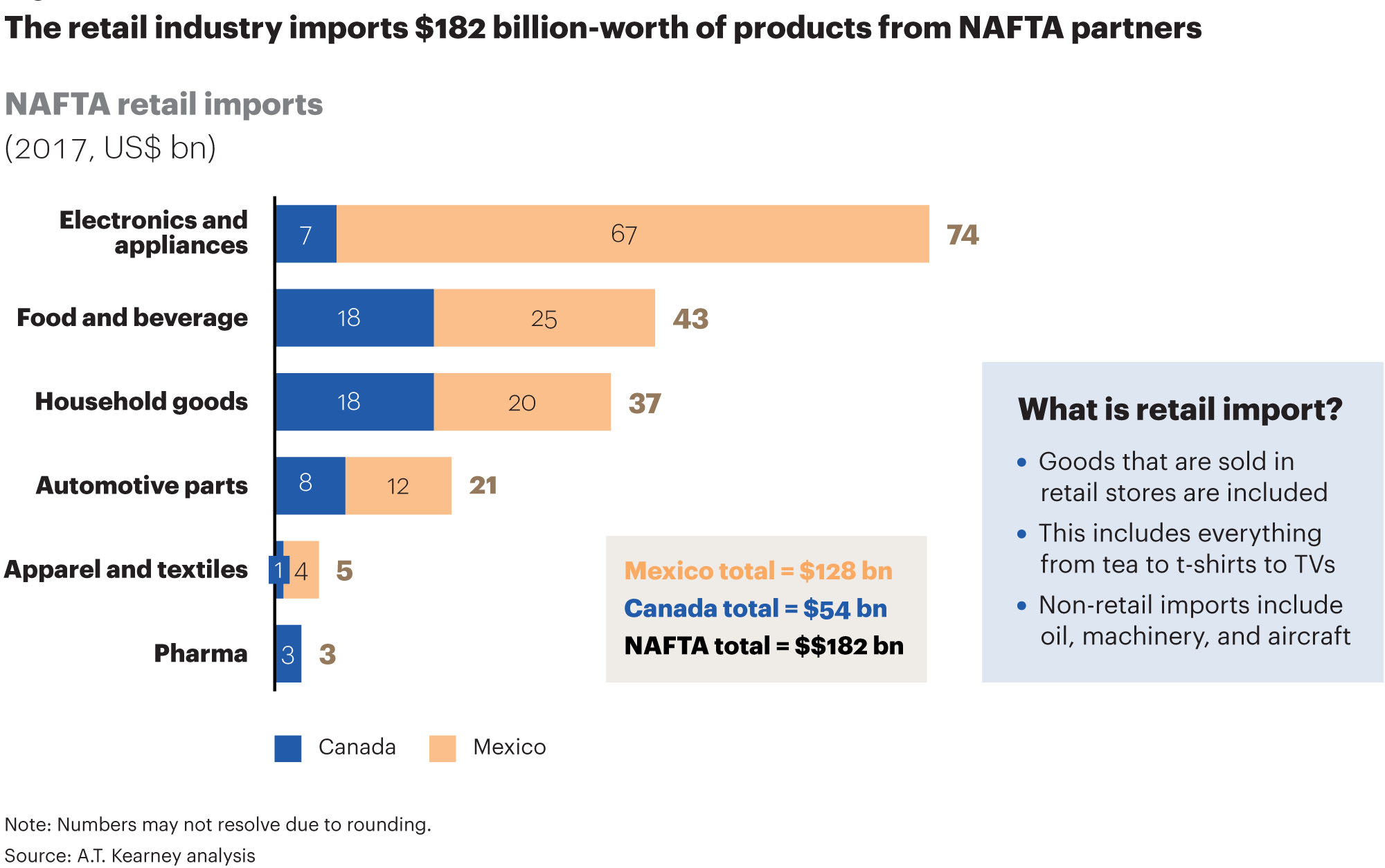 According to the study, retail carries $182 billion worth of products from NAFTA partners. Without NAFTA, tariffs would increase the cost of these products by $5.3 billion annually. These tariffs and impacts to revenue from loss of consumer purchasing power would reduce retailers’ bottom lines by up to $15.8 billion each year. The effects could extend to employment and could lead to the loss of 128,000 retail and retail-supported jobs within the next three years.
At the current rate of trade, food and beverage would be the most affected by a withdrawal, with $2.7 billion in increased costs. The U.S. food and beverage retail sector had sales of $719 billion and generated total operating profits of $20 billion last year, with an operating margin of 2.8 percent. The category paid $5 billion in taxes on the profits, for an effective tax rate of 25 percent. New tariffs that would arise without NAFTA would cost an additional $2.7 billion, equaling an increase in the effective tax rate of 10 percent, from 25 percent to 35 percent.
For example, the United States consumes 20 percent ($18 billion) of the chocolate eaten in the world annually. U.S. retailers import $2 billion of this candy from Canada and Mexico; without NAFTA, 10 percent of the chocolate consumed in the United States would be affected by an additional $261 million in tariffs annually. Also, with more than half of all asparagus consumed in the United States imported from Mexico, NAFTA has helped keep the labor-intensive vegetable affordable. Without the trade agreement, the cost of importing asparagus would increase by $50 million a year. 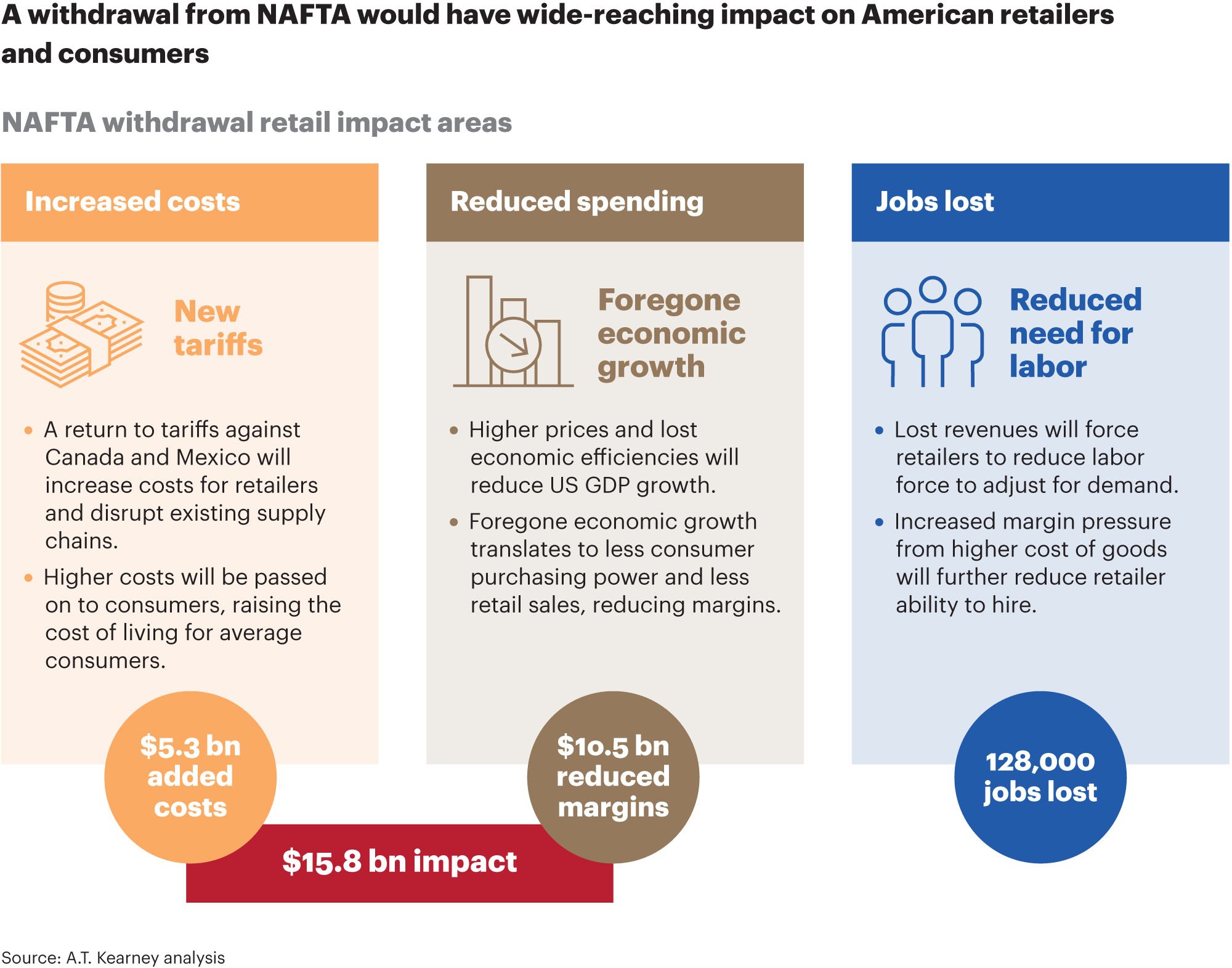 “NAFTA has dramatically influenced the U.S. economy, the retail sector and Americans’ standard of living. From the time it came into force, retailers have gradually become de facto importers, because their customers demand the products that NAFTA allows them to purchase easily, affordably and with great variety. Retailers, then, are agents without the protections that other importers enjoy,” observed Gott.

Should NAFTA be terminated, the report suggests that retailers:

“If the United States terminates NAFTA, many importers would likely be covered by other protective sanctions against foreign competition,” added Gott. “U.S. retailers do not face the same kind of foreign competition, but they would be left to face higher costs for the goods they sell — a prospect whose ramifications would reverberate throughout the U.S. economy.”

To help preserve NAFTA, the members of the grocery industry have joined Americans for Farmers & Families (AFF) to help inform the administration and legislators about the need to preserve and modernize NAFTA. Last summer, GMA (Grocery Manufacturers Association) also detailed the four priorities of maintaining the trade agreement.