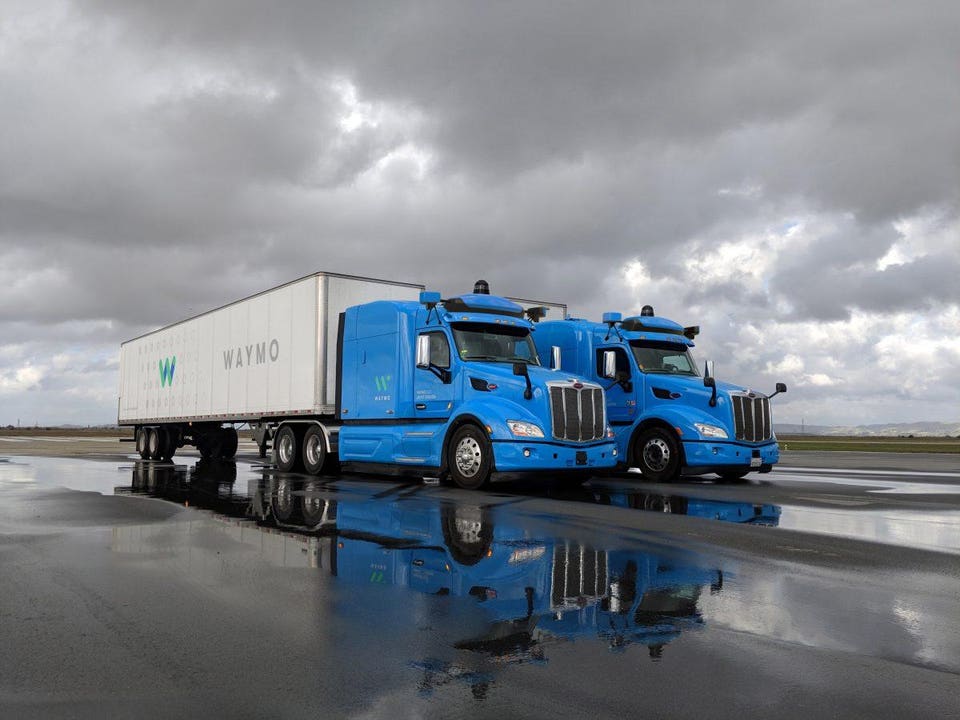 Alphabet’s Waymo is launching a robot truck project in Atlanta with Google, making clear that its plans for self-driving vehicle technology go beyond an on-demand ride service. The announcement also caps a week of heavy metal tech news including updates on Uber’s driverless truck program and the start of test runs for futuristic electric Tesla Semis.

After a year of stealthy testing in California and Arizona, Waymo is starting larger-scale public tests of Class-8 semi-trucks loaded up with vision sensors, software and a computing system created in-house. They’ll haul loads in a program operated with Google’s Atlanta-based logistics unit, Waymo said in a blog post. A spokeswoman declined to say how many of the modified Peterbilt trucks, which will have human safety drivers standing by if problems arise, will run in the pilot project.
“Trucking is a vital part of the American economy, and we believe self-driving technology has the potential to make this sector safer and even stronger,” the company said. “With Waymo in the driver’s seat, we can reimagine many different types of transportation — from ride-hailing to logistics.” 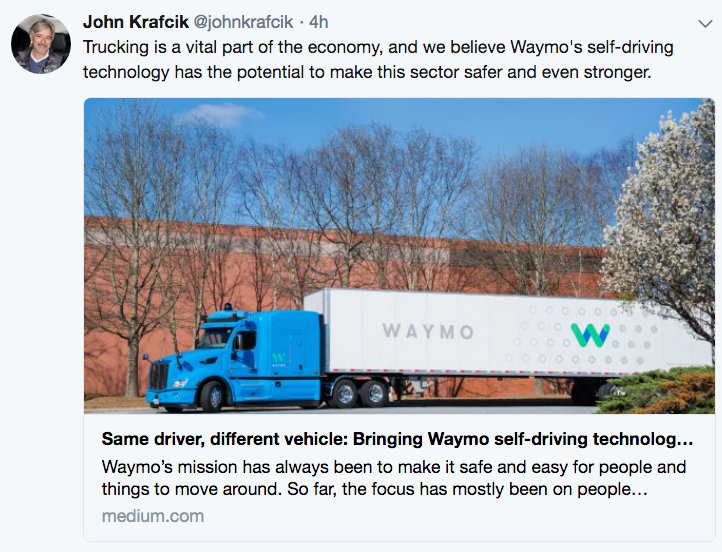 In late 2017, Waymo CEO John Krafcik identified autonomous ride services and commercial trucking and logistics as the top two focusesfor the company’s technology. He also said Waymo might work with cities to provide “last-mile” transportation for people to get from their homes or work to a transit station, though the company has yet to elaborate on those plans. The semi program follows recently announced plans to deploy Waymo autonomous minivans in Atlanta.

Trucking has been an attractive target for driverless tech developers the past few years as the operating environment – lots of highway runs from warehouse to warehouse instead of navigating city streets full of pedestrians and cyclists – is less challenging. Another positive aspect: The vision system rigs, including laser LiDAR sensors that create 3-D, 360-degree maps, stereo cameras and radar, that can look ungainly on cars and minivans, aren’t particularly noticeable on gargantuan vehicles already loaded up with elaborate lighting and exhaust systems.
Uber jumped into the truck space with its lavish 2016 acquisition of Otto, an autonomous truck tech startup led ex-Google Self-Driving Car engineer Anthony Levandowski. That deal ultimately ignited a high-profile legal fight with Waymo that was settled last month. It also led to the firing of Levandowski and setbacks for Uber’s autonomous tech efforts.
The program seems to be back on track, however, as Uber this week disclosed that its robotic trucks have been hauling commercial loads in Arizona for the past few months. Uber also posted a video showing how it can coordinate transfers of trailers hauled by robotic trucks to those driven by humans.

Never one to pass up an opportunity to gin up excitement among his vast social media fan base Elon Musk this week tweeted that the prototype electric Tesla Semis he unveiled in November have started hauling loads between the company’s Gigafactory battery plant in Sparks, Nevada, to its assembly operation in Fremont, California, a 240-mile trip each way.
While not operating autonomously, at least not yet, Musk promised the truck will set a new standard for Class-8 vehicle performance in terms of acceleration, efficiency and operating cost per mile with high-powered battery packs that deliver between 300 miles and 500 miles of driving per charge.

Those are big goals and given the significant delays the company has run into delivering its entry-level Model 3 sedan to customers as quickly as promised, it remains to be seen if Tesla can deliver its truck on time, at the price and with all the performance attributes promised by Musk’s target of late 2019 or early 2020.
At a minimum, the new technologies coming to commercial trucking from Waymo, Uber and Tesla underscore that massive changes are afoot in an industry that’s not typically associated with being cutting-edge.