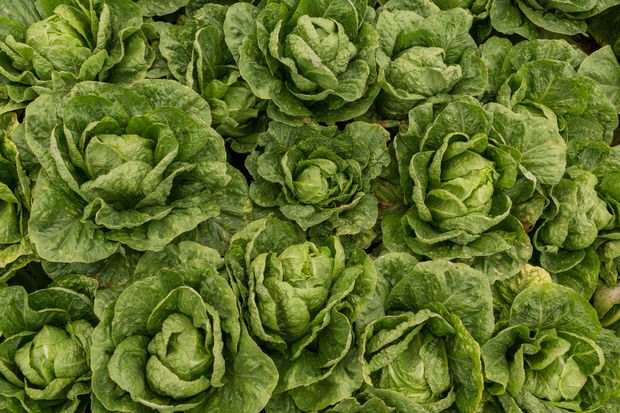 Production of romaine lettuce has shifted to California farms, and growers there supplied retailers and restaurants seeking to replenish stocks. Seen, romaine lettuce growing near Watsonville, Calif., in a 2015 photo. PHOTO: JASON HENRY FOR THE WALL STREET JOURNAL
By
Jesse Newman and
Heather Haddon

A deadly E.coli outbreak tied to romaine lettuce has shaken consumers’ faith in the nation’s favorite salad green, resulting in millions of dollars in losses for growers, retailers and restaurants.
More than six weeks into the outbreak, prices for romaine, historically the most-sold salad green, have dropped by more than half. Grocers nationwide have been clearing it from shelves in hundreds of stores. Several restaurants that served romaine are facing lawsuits from customers, and wholesalers have had to quickly round up kale and mesclun for restaurants that struck it from their menus.

Federal health officials now say tainted romaine is gone from the marketplace. But for weeks it urged consumers to throw away any romaine lettuce left in their homes and to avoid eating or buying it unless they were certain it wasn’t grown in the desert region of Yuma, Ariz.
Officials have traced the problem to Yuma, but they haven’t been able to pinpoint the exact source of much of the lettuce that has been tied to 172 illnesses and one death. The U.S. Food and Drug Administration says the last shipments of romaine from Yuma were harvested on April 16, and the harvest season there is over—making it unlikely that romaine from Yuma is still available in stores, restaurants or people’s homes.
“It’s [cost] thousands and thousands of dollars; it could even run into the millions,” said Howard Popoola, Kroger Co.’s vice president of corporate food technology and regulatory compliance, referring to costs at the largest U.S. supermarket chain.

Romaine, the most popular lettuce, has seen a decline that has affected overall lettuce sales. 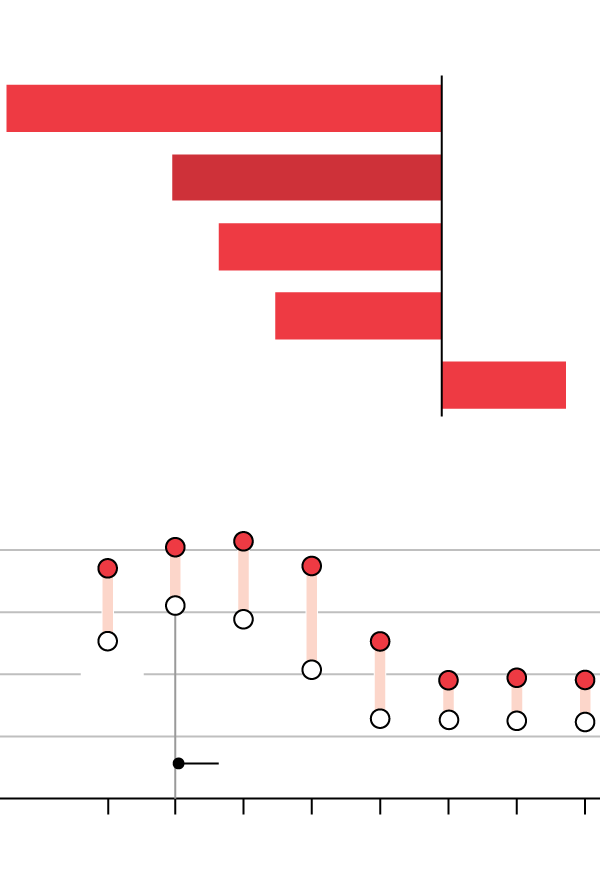 from the previous year*

Growers and sellers of romaine lettuce fear it could take months or longer for sales to recover. Earlier this month, sales had dropped 45% from the year-ago period, according to Nielsen figures. The outbreak has hurt other leafy greens, with overall lettuce sales earlier this month down more than 27%.
U.S. lettuce production was valued at $3.6 billion in 2017, making it the leading vegetable crop by value. Prices for whole romaine heads have tumbled as much as 60% since early April, according to U.S. Department of Agriculture data.
FDA Commissioner Scott Gottlieb said technical advances are helping regulators better identify the origins of food-borne illnesses, and they are helping to keep food safer. “Our tools and our regulatory oversight have gotten more effective and more vigilant,” he said in an interview.
Taylor Fresh Foods, a major salad producer known as Taylor Farms, has abandoned hundreds of acres of lettuce in the Yuma region since then, plowing under ripe produce or leaving it to rot.

“Trucks all across the country were dumping romaine,” said Drew McDonald, vice president of quality and food safety at the Salinas, Calif.-based company. “The loss of all that product was significant for us because of our size,” he said, adding that the company in April scrambled to shift production north to its central California farms to supply retailers and restaurants seeking to replenish stocks.
Ratto Bros., a smaller family farm based in Modesto, Calif., said it has lost $120,000 so far, after having planted enough romaine to fill an extra 20,000 cases this year. “It’s pretty devastating,” said Frank Ratto, the company’s vice president of marketing.
Growers fear the current outbreak could mirror a 2006 E.coli outbreak tied to spinach that killed three people and sickened more than 200. Economic losses from that outbreak totaled $350 million, according to an academic estimate.
“We never really got our footing back after that,” said Dan Sutton, general manager at Pismo Oceano Vegetable Exchange, a California-based leafy-greens producer. He said Pismo grows half the volume of spinach it did before the 2006 outbreak because of reduced demand. It has abandoned one-third of its romaine lettuce this year.
Some retailers have had to hire workers to pull romaine from shelves, hang signs and counsel shoppers about the safety of lettuce. “Consumer confusion about lettuce safety has followed,” said Richard Phegley, chief financial officer for West Coast-based Smart & Final Stores Inc., a grocery chain that lost sales.
The effort has taxed rank-and-file workers as well as chief executives at major companies. After a Kroger meal-kit customer complained about the lettuce on sandwiches featured in the grocer’s boxes, company Chief Executive Rodney McMullen tasked Mr. Popoola with calling and reassuring the shopper about its safety. The lettuce outbreak “will continue to haunt us for a whole long time,” Mr. Popoola said.
Retailers are eager for regulators to determine the source of the outbreak so they can try to recoup some of their costs. Supply-chain contracts typically require that retailers and restaurants pay for the cost of pulling products during an outbreak, unless a supplier has been identified and a recall initiated; some contracts require the supplier to reimburse distributors for related expenses, according to Angela Spivey, a food-and-beverage attorney at McGuireWoods LLP.
Supermarkets also are eager to regain the confidence of shoppers like Francesca LaBianco, a 24-year-old office worker from New Jersey’s Bergen County who shops at ShopRite Supermarkets Inc. “I don’t want to risk eating it if it can cause me to be sick,” she said.

Restaurants, meanwhile, raced to determine the source of their romaine, removed it from menus or added other salad greens.
Although its romaine wasn’t implicated in the outbreak, Just Salad, a fast-casual chain with nearly 30 U.S. stores in New York, Chicago and Philadelphia, decided for the first time to add iceberg lettuce to its menu for customers seeking alternative greens, said Janani Lee, purchasing manager for the chain.
That meant working with suppliers to find a reliable iceberg source and training teams how to handle the new ingredient. Just Salad moved quickly to inform customers via email and social media that its lettuce was safe to eat.
“We want to make sure customers can keep trusting us,” Ms. Lee said.
People sickened in the outbreak have filed lawsuits against several restaurants, including Panera Bread Co.
Walmart , Inc., its Sam’s Club division and Taylor Farms also face a lawsuit seeking class-action status in California, accusing the retailers of exposing consumers to potentially tainted romaine and not pulling the produce. Walmart and Taylor Farms didn’t respond to requests for comment on the litigation.
“Food safety is important to us,” said a statement on Panera’s website. “When something happens, like the recent industrywide issues affecting romaine lettuce harvested in Yuma, Arizona, we act quickly to remove the risk from our cafes.”
The company said that it “promptly” removed Yuma romaine from its stores after federal health officials issued a public advisory, and that the lettuce it is serving now is unaffected.
A single food-borne illness outbreak can cost a restaurant up to as much as $2.6 million, according to an April study by researchers at Johns Hopkins Bloomberg School of Public Health.