The prime age cohort is the most important age group for GDP growth.
The U.S. population pyramids show decades of stable prime age population.
This knowledge can be invested right now for the long term.
Now that Trump is actively (and egregiously) pursuing his anti-immigration ideology (both legal and illegal), we thought it appropriate to revisit the economic argument in favor of immigration that we made two years ago.

The age distribution within a population is one of the best predictors of future economic growth or decline we have. In particular, two cohorts – working age (18 to 64 year-olds), and prime age (24 to 54 year-olds) – have the greatest impact on economies, with the prime age cohort being the more significant of the two. During the prime age years, individuals earn, spend, and save the most, and therefore contribute the most to GDP growth. The prime-age cohort impacts more on GDP growth than any other demographic subset. 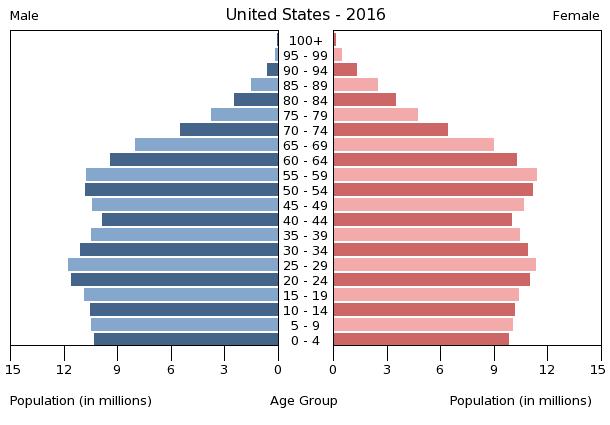 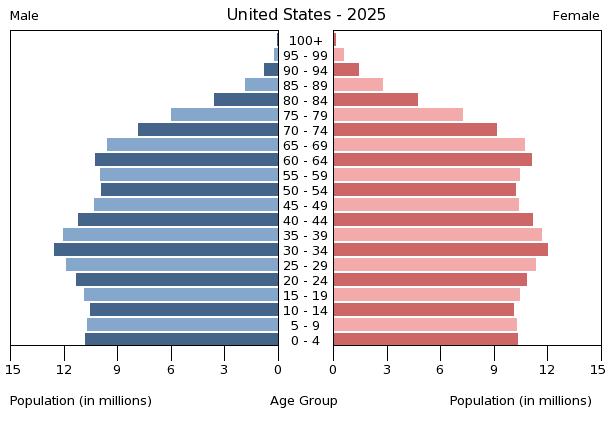 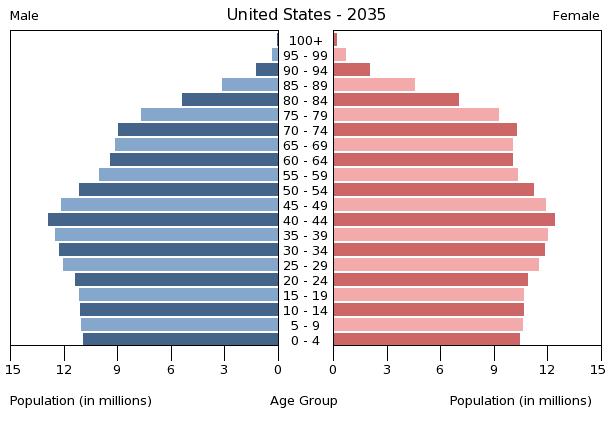 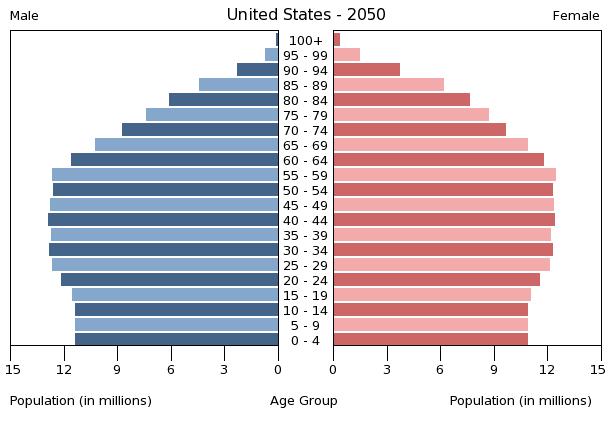 For comparison, look at the graph below that shows the top-heavy Chinese pyramid for 2050. The prime-agers have moved into old age and there is an insufficient number of replacements coming up from behind. 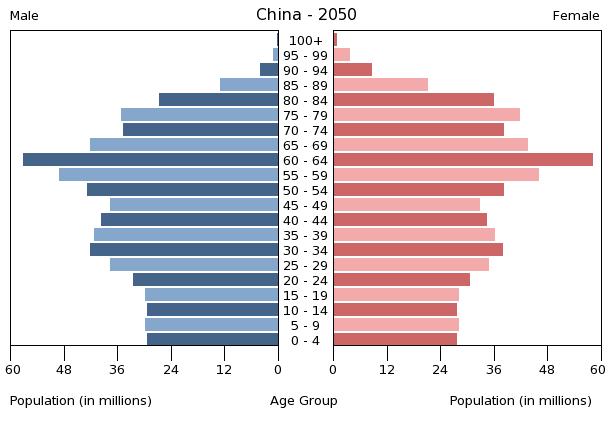 This persistent bulge will benefit the U.S. for the next three decades by supporting a healthy GDP growth rate (all other drivers being equal), which is in contrast to most other developed economies where the prime age bulge is completing its migration into old age. America is spared this near ubiquitous demographic bust because of its relatively high birth rate:

2.1 in 2006, with 4.3 million total births, the highest levels in 45 years, thanks largely to recent immigrants, who tend to have more children than residents whose families have been in the United States for several generations. Moreover, the nation is on the verge of a baby boomlet, when the children of the original boomers have children of their own. (Joel Kotkin, Smithsonian)

Historically, immigrants have played a leading role in the building of the American economy, and America needs them in order to build its future economy as well. 33% of venture-backed companies that went public between 2006 and 2012 had at least one immigrant founder at the helm (Fastcompany). As we wrote in our Seeking Alpha Instablog article about investing in refugees:

Refugees and immigrants are 30% more likely to start a business than non-immigrants, and those businesses employed an estimated 4.7 million people in 2007. (Whitehouse Blog, 2012) Refugees and immigrants produce an increase in spending on local goods and housing, open-up new markets in diverse areas of the Globe, bring new skills and fresh perspectives, create employment and fill empty employment niches, and pay taxes; in other words, all the activities that result in GDP growth. (ANG Traders, Seeking Alpha Instablog)

It is no small irony that a particular presidential candidate, who professes to be a business genius, would run a campaign that is overtly anti-immigration. Stopping immigration is the most expedient way to shorten the lifespan of the prime age bulge, and cripple the growth of the future American economy. 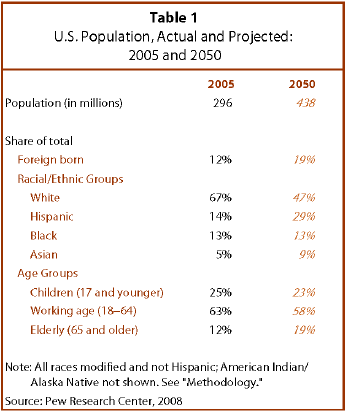 The Pew Research Centre table 1 (above) shows an overall increase in U.S. population of more than 100 million people by 2050. The table also shows demographic shifts in both ethnic make-up and, to a lesser extent, age cohorts: America will become less White (67% down to 47%), more Hispanic (14% up to 29%), and more Asian (5% up to 9%). The shift in age cohorts is much more subdued, with only a small drop in the working age cohort (63% down to 58%), and a reasonable increase in the Elderly (12% up to 19%). The working age bulge stays at a healthy size all the way through to 2050, due mostly to Ethnic growth.

Before we delve into how one might invest this knowledge in a long-term way, we need to keep in mind that although demographics is a major driver of GDP growth, it is not the only factor involved: education levels, income inequality, and government debt have an impact on GDP. We will be writing about the possible effects of these drivers in future articles.

How to Invest This Knowledge

By 2050, there will be another 100 million people living within the borders of the U.S., and they will require many things: Dwellings, appliances, healthcare, clothing, food, transportation, entertainment.

To invest for the long term, we look for investments that, first of all, are big and solid enough to stay intact during the inevitable downturns, and second, are able to grow with the increase in population.

Note: We have marked the date when we first published this piece with a vertical blue dashed-line on the charts.

100 million more individuals means that many new living units will have to be built. And since the greatest growth will be in the Hispanic population who have more children than most of the other groups, large dwellings will be needed. We think that homebuilders will do well in the long term, and with share prices coming off of a recent low, we think it is an opportune time to start investing in the homebuilders

Taylor Morrison Home Corp. (NYSE:TMHC) focuses on home building in the fast-growing U.S. southern states such as California, Arizona and Florida. With a P/E of just 10.0 and an operating margin of 12.7%, Taylor Morrison looks well valued compared to its peers. 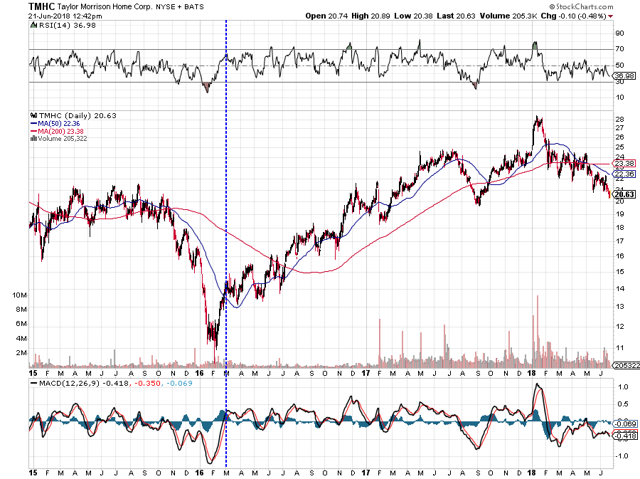 Miami-based Lennar Corp. (NYSE:LEN) is the largest homebuilder in the United States by market cap. The company operates in 17 states, has a P/E ratio of 12.2 and an operating margin of 12.2%. 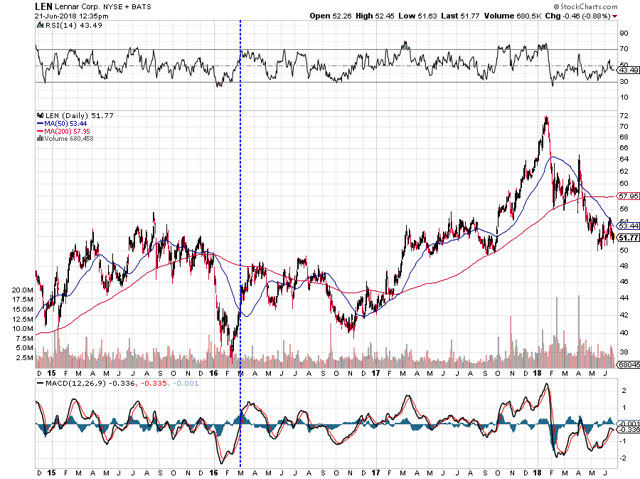 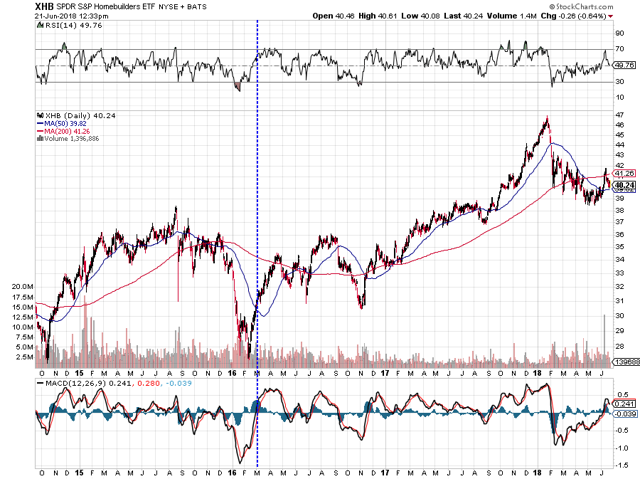 The chart below (marketingcharts.com) reveals the effect that having children under the age of 18 at home has on daily spending. Since 50% of Hispanic families have children living at home, it is reasonable that they should spend more per average household. 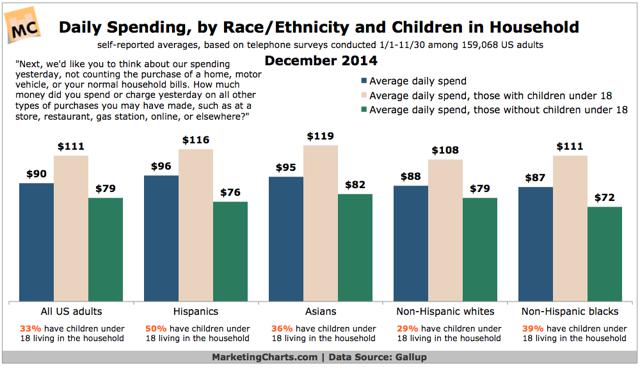 According to the NPD Group:

At the moment, it is not possible to dissect out Hispanic specific retailers, so we recommend the two nationwide giants of retail: Walmart (NYSE:WMT), and Costco (NASDAQ:COST). Walmart is making investments in both its Human capital and in its online retailing, and Costco should continue to grow as the population increases. 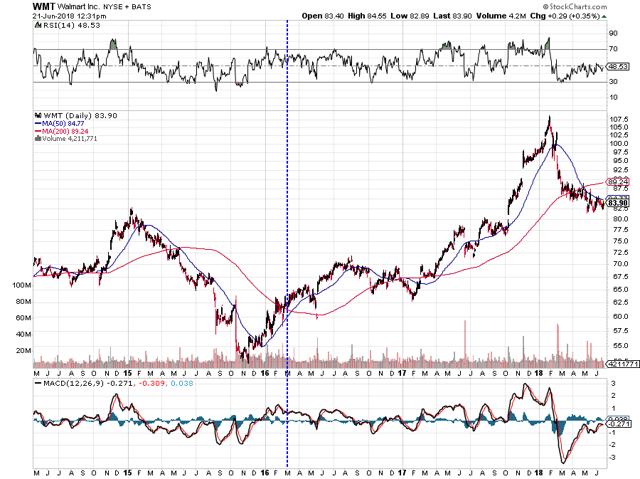 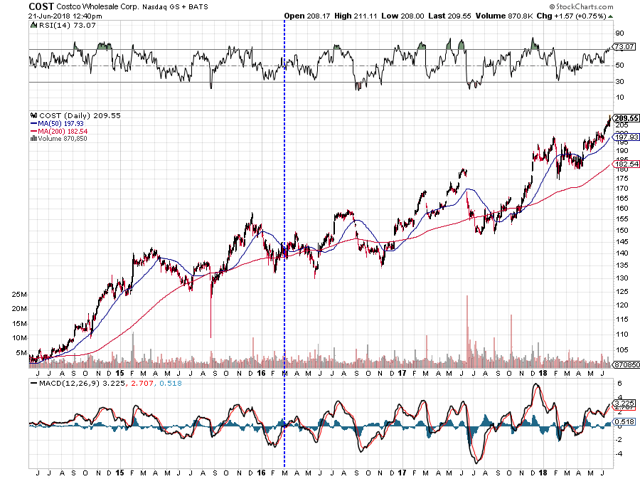 In conclusion, the demographic dividend that comes from the prime age cohort will be available to America for the next several decades because of the increased birthrate of its ethnic (immigrant) population. This knowledge should inform our long-term investment decisions.