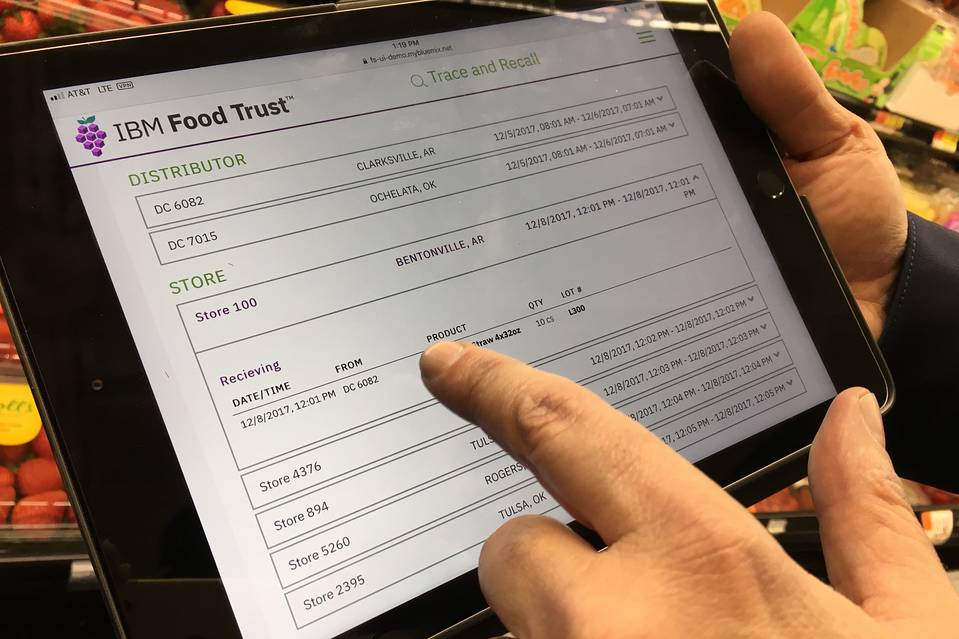 A Food Trust trace of a shipment of strawberries in early December 2017 shows that they traveled from two distributors, in Clarksville, Ark., and Ochelata, Okla., to five Walmart stores. PHOTO: KIM S. NASH / THE WALL STREET JOURNAL

BENTONVILLE, Ark. — When bad food gets into the supply chain, regulators must figure out what went wrong, yet no company, industry group or government agency has a complete picture of how fruit, meat or other foods move from field to fork. Companies are required to record just a few steps in their supply chains and some still keep information on paper.

Now, a year after initial tests, 10 of the world’s biggest companies, including Walmart Inc. and Nestlé SA, are building a blockchain to remake how the industry tracks food worldwide. The so-called Food Trust aims to improve recalls, quickly identifying the issue and shrinking the time consumers are at risk. Business benefits such as avoiding losses from overly broad food recalls are also expected.

“You’re capturing real-time data at every point, on every single food product,” says Frank Yiannas, vice president of food safety at Walmart, which leads the effort. “It’s the equivalent of FedEx tracking for food.”
The Food Trust group, which also includes Dole Food Co., Driscoll’s Inc., Golden State Foods, Kroger Co., McCormick and Co., McLane Co., Tyson Foods Inc. and Unilever NV, wants to set new standards for the rest of the food industry. “We are competitors, yes, but working together to ensure the trust of consumers,” says Chris Tyas, global head of supply chain at Nestlé.
Blockchain, aside from enabling a cryptocurrency craze, has gained supporters in diverse industries. British Airways has tested the technology for tracking flights. Merck Inc. sees it as a way to share drug shipping data. Bank of America Corp. has patented blockchain inventions and some in the music business use it to secure artist rights.
Companies supporting the Food Trust blockchain, built with International Business Machines Corp., see the technology as a record-keeper to govern transactions with many hand-offs, preserving one consistent history, says Howard Popoola, vice president of corporate food technology and regulatory compliance at Kroger. 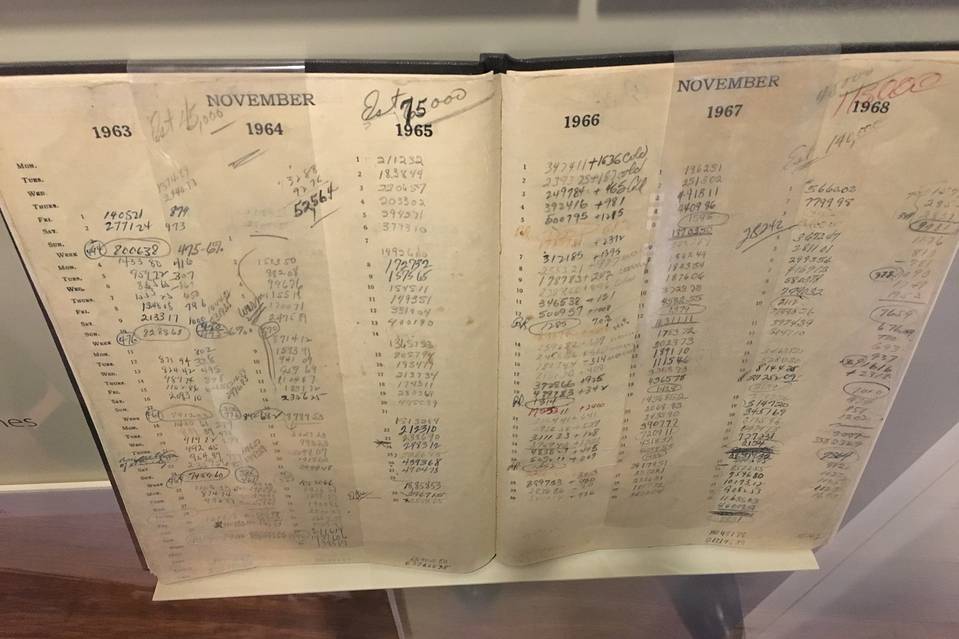 Blockchain establishes authorship or ownership that experts say can’t be faked and eliminates costly middle layers because of its peer-to-peer structure. The encrypted data stays up-to-date on all participants’ systems.

The Food Trust project, still in development, comes too late to help in an ongoing investigation of romaine lettuce contaminated with E. coli bacteria that the Centers for Disease Control says has sickened at least 197 people in 35 states. With five dead, this romaine problem surpasses the then-historic 2006 E. coli outbreak tied to spinach in fatalities and geographic reach. 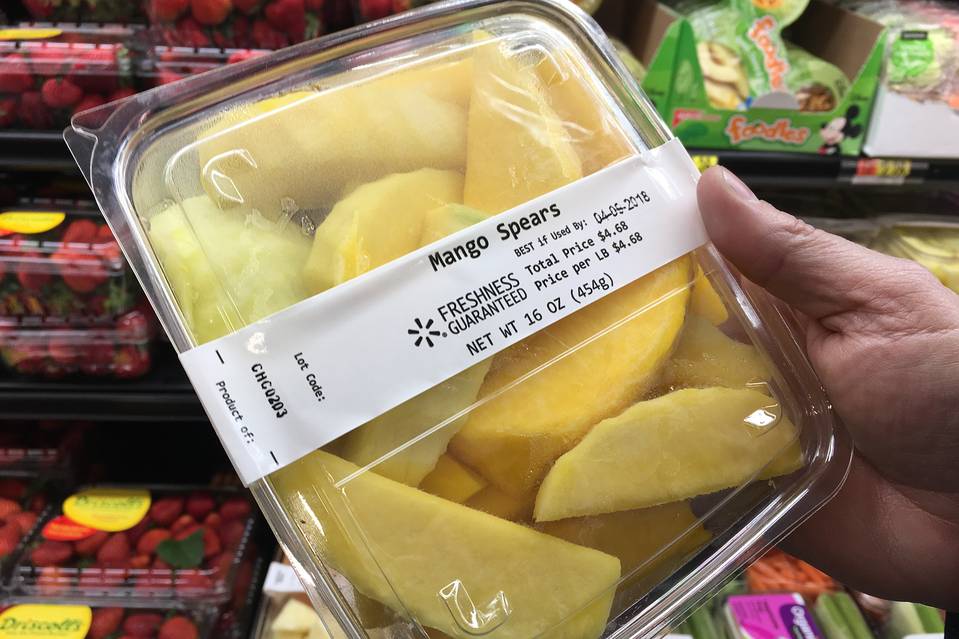 So far, the system stores data related to 1 million items in about 50 food categories, according to IBM. That includes Nestlé canned pumpkin, Driscoll’s strawberries and Tyson chicken thighs.
Mr. Yiannas, strolling the produce aisle of a Walmart Neighborhood Market store here on a recent morning, picks up a container of sliced mangoes. In a blockchain test last year, he says,  his team traced a similar batch of mangoes from a Mexican orchard to a Walmart store in 2.2 seconds, Mr. Yiannas says. That’s much faster than the six days and 18 hours the trace-back took gathering data from paper, barcodes, and other sources, he says.
Food Trust, he says, aims to replace the industry’s current practice of “one step up, one step back.”
Current federal rules require that each player in the supply chain – such as a processing house or trucker – keep records about where it got food and where it sent food. In an illness outbreak or other problem, investigators from the Food and Drug Administration and elsewhere must contact companies that they think could be involved to try to recreate the journey of the suspect food. Researchers often hike through fields and inspect supermarket shelves for clues.
Legwork can take months and still leave holes. Eleven weeks after the CDC warned the public about an E. coli infection later linked to lettuce, authorities don’t know precisely where or how it started, other than it likely began in the growing region of Yuma, Ariz.
Investigators did learn that some romaine records aren’t electronic, says Stephen Ostroff, the FDA’s deputy commissioner for foods and veterinary medicine. He declined to comment on the role of paper information in the case but said a lack of data uniformity and the use of paper forms can slow trace-backs.

“Information is retained in a whole variety of ways, including on pieces of paper. Then somebody has to go find it and add to a database. That takes some time,” he says.
To help solve the paper problem, Food Trust offers a mobile app for farmers, pickers and others to enter data quickly onto the blockchain.
Still, challenges are emerging with Food Trust, says Mr. Tyas. Nestlé, with 2,000 brands and many suppliers and distributors, manages data on paper and with technologies that include barcodes and proprietary software. Technology and safety experts at Nestlé are working with Food Trust partners to build integration tools, he says.
A complete shift to blockchain by the food industry could take years, Mr. Yiannas acknowledges. But as products are added to Food Trust, traceability will outpace today’s romaine situation, he says. “Outbreaks don’t have to be this big and this long.”