Consumer packaged goods sales soared 29 percent on Amazon after customers buy Echo.
Users should be even further embedded into the Amazon ecosystem.
Expected ongoing growth in sales of Echo and Amazon Prime should be huge catalyst over next couple of years. 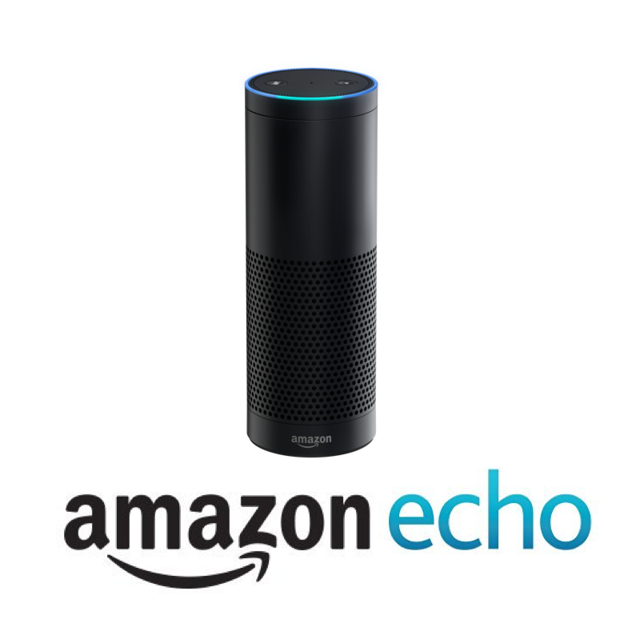 Over the period of a year, data from an InfoScout survey, working in collaboration with Alpine.AI, found that consumers buying an Amazon Echo increased purchases in the massive consumer packaged goods market by 29 percent from Amazon (AMZN).

The purchases made by buyers using Echo and Alexa were a little smaller than in the past, but they were larger in number.

In this article we’ll take a closer look at some of the data collected in the survey and its importance to investors, and more importantly in my opinion, what it means in relationship to making Amazon even more sticky to consumers, and the potential it represents to grow Prime sales through the roof.

Some findings of the survey

None of those are surprising when considering they are things that have to be done on a daily or consistent basis. It also suggests the Echos were probably placed in kitchens or bathrooms in order to give immediate and spontaneous orders when products could be seen to be getting low as they were being used. 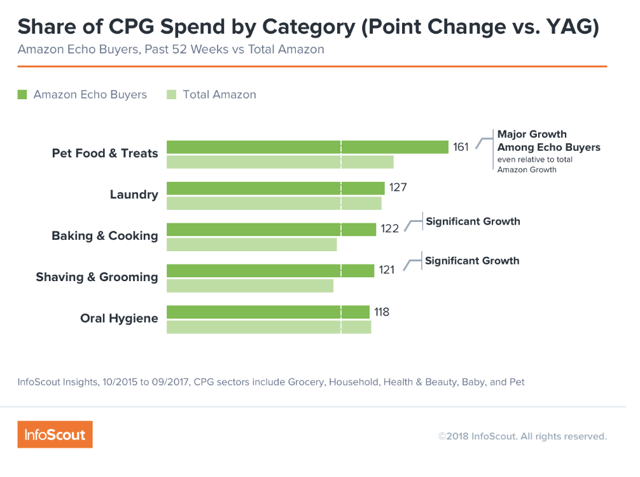 Another positive for Amazon was even without an Echo Amazon shoppers were increasing consumer packaged goods purchases at a 19 percent pace. And as mentioned earlier, with an Echo that increased to 29 percent.

As for who’s making Echo purchases, the leading demo is older white, high-income males. That probably helps explain why approximately 25 percent of Echo sales are given as gifts.

The study found that there was a difference between buyers and users. In the case of users under the age of 25, they only accounted for 25 percent of Echo purchases, while representing 15 percent of users.

What that tells me is even though higher-income males buy the most Echos, it doesn’t stop users from making purchases, based upon the increase in consumer packaged goods orders. 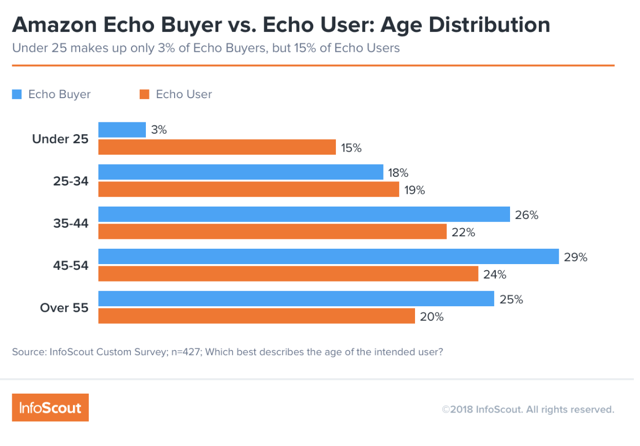 The regular Amazon customer made a little under 20 purchases during the year the study was conducted, while those owning Echos made just under 27 purchases.

Orders during that time on average fell from $26 to $25. That points to consumers making buying decisions in the moment, which supports my conclusion that the Echo is located in areas where users are noticing immediate shortages, or upcoming shortages of products they use on a daily or consistent basis.

So while the orders are slightly smaller, it is more than made up for by the seven more purchases made per year.

What is of most interest to me is how this related to Amazon Prime.

Echo could be a major catalyst for Prime revenue growth

One of the important things I haven’t yet been able to discover about the study is what if any, part Prime membership played in the results.

In other words, were consumers making Echo purchases also part of Prime, and if so what percentage of them were. This has enormous implications for Amazon’s growth if the study included a significant number of Prime members.

I draw that conclusion from remarks made by Alpine.AI CEO Adam Marchick, who stated he sees the “450 million devices today, going to over one billion by the end of this year.”

With Amazon likely to get close to 50 percent of those sales, if not a little more, the benefit to the company could be staggering.

If that number increases by up to 29 percent if Prime users also own an Echo, it points to some extraordinary growth going forward. That’s not only from the existing Echo owners, but from the millions that are expected to be added by the end of 2018.

Something else to take into account is since the survey was conducted over the period of a year, the early part of the study would have had a much smaller Echo user base to work from. That means the sales numbers were primarily on the back end of the period of time the study was conducted, rather than the front end.

That’s important to understand because we may be seeing the early momentum of the increase in sales that accompany owning an Echo.

When looking at the Echo, Amazon Prime and the streaming service included with Amazon Prime, along with other perks, it’s fairly easy to see that Amazon is working on getting their customers so embedded in its ecosystem that it will be extraordinarily difficult to dislodge them by a competitor attempting to persuade them to buy from them.

One of the things Alexa and Echo does in my opinion is not only enhance its Prime offering, but it appears it may now be getting more sales from its non-Prime members who buy or are gifted with an Echo. I draw that conclusion under the assumption the survey included both Prime and non-Prime members.

The good news for Amazon is whatever the survey mix was, at minimum it was generating another 29 percent from its customer base. What has yet to be known is if that 29 percent included a much higher revenue baseline as represented by Prime subscribers, and what percentage of the survey they represented. Either way, the numbers represent an amazing catalyst if Amazon does get from 40 percent to 50 percent or more of new voice assistant devices estimated to be sold by the end of 2018, it could easily more than double the number of Echo users it now has.

All of this would further cement a lot more Amazon customers into its already attractive and sticky ecosystem.

What appears to be happening with Amazon is Echo users are making many more impulsive buying decisions because of the convenience and seamless experience represented by the device. It has resulted in slightly lower sales per order, which is made up for by the increase in the number of orders over the year of the survey.

With or without Amazon Prime, Amazon customers increased purchases by 29 percent in consumer packaged goods. That should improve even more as Echo usage scales out over the next couple of years.

The performance for Amazon will probably surprise to the upside in my view, and that isn’t even the most important part of the narrative. What this should do is embed consumers even further into the Amazon ecosystem, positioning the company to market new products and services to them in the years ahead.

This is not only going to be a big win in the short term, it looks like it’s another big win for the long-term as well.