Alibaba is a widely profitable business growing at full speed.
Valuation reflects aggressive growth expectations, but the stock is not overvalued when considering the company’s quality and long-term potential.
Rising earnings expectations are driving the stock price higher.
Winners tend to keep on winning over time, and Alibaba stock is clearly outperforming.
When considering financial quality, valuation, momentum, and relative strength, Alibaba stock looks like a compelling proposition for investors.

This idea was discussed in more depth with members of my private investing community, The Data Driven Investor.

Alibaba (BABA) stock is performing remarkably well lately, shares of the Chinese tech leader have gained nearly 54% in the past 12 months. With the stock trading near historical highs, investors may understandably feel reluctant to initiate a position in Alibaba at current prices.

However, only because the stock is doing well, that doesn’t mean that the best is already in the past for investors in Alibaba. In fact, valuation is still quite reasonable considering the company’s growth rates.

Statistical data has proven that quantitative factors such as financial quality, valuation, momentum, and relative strength can be powerful return drivers for stocks over the long term. According to these indicators, Alibaba stock still offers plenty of upside potential.

Alibaba is the top player in the e-commerce industry in China thanks to its two main portals: Taobao focused on C2C transactions and Tmall for B2C operations. In addition, Alibaba is a leading player in digital payments with Alipay, and it also has a sizeable presence in cloud computing and digital entertainment, among many other segments where the company operates.

The company has access to massive amounts of data from its multiple businesses in areas such as marketplaces, financial services, logistics, cloud computing, media and entertainment, and online-to-offline services. Data is the new oil, and Alibaba owns gargantuan amounts of strategically valuable data.

Financial performance doesn’t leave much to be desired. Total revenue during the quarter ended in March of 2018 amounted to $9.87 billion, increasing by 61% year-over-year. The company ended the quarter with 552 million users on its China retail marketplaces, an increase of 37 million new users versus December 31, 2017. 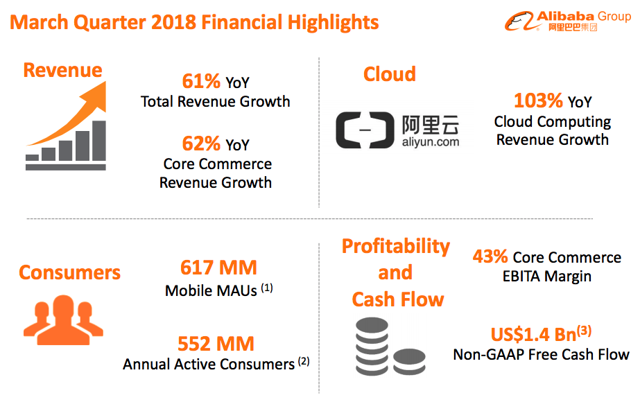 Alibaba is aggressively investing in all kinds of growth initiatives, and this is having a negative impact on profit margins at the whole company levels. On the other hand, profitability at the core business level is huge and expanding. 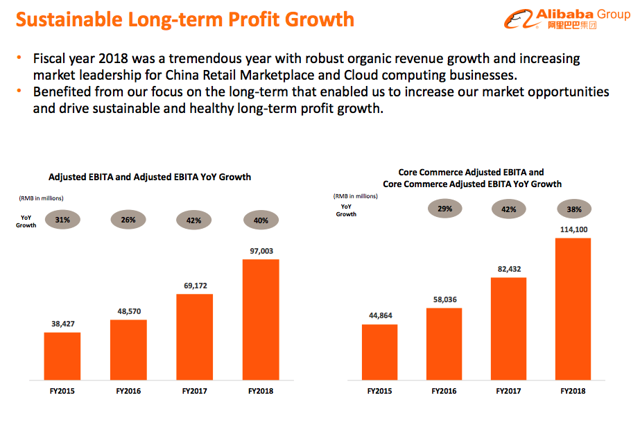 Even the most powerful growth company can be a mediocre investment when valuation is excessively high. However, that’s hardly the case when it comes to Alibaba, since the stock is trading at fairly reasonable levels considering the company’s financial performance.

Price is what you pay and value is what you get. Alibaba is highly profitable growth business, and the company can easily justify an above-average valuation levels based on its current performance and long term potential.

Alibaba delivered both sales and earnings above Wall Street expectations in the most recent quarter. Although there have been some small negative adjustments to earnings forecasts in recent weeks, the main trend in earnings expectations over the past year is clearly positive.

In the stock market, as in life in general, winners tend to keep on winning over time. Stocks that are outperforming the broad market in general and the industry in particular tend to continue doing so more often than not.

Besides, money has an opportunity cost. When you buy an investment with below-average returns, that money is not available to be invested in companies with superior performance. For this reason, we don’t just want to buy stocks that are doing well, we want to buy the names that are performing materially better than others.

Alibaba is widely outperforming both the iShares China Large-Cap ETF (FXI) and the Invesco China Technology ETF (CQQQ) over the past 12 months. Superior relative strength bodes well for investor in Alibaba over the middle term.

Putting It All Together

The PowerFactors system is a quantitative investing system available to members in my research service, “The Data Driven Investor.” This system basically ranks companies in a particular universe according to the factors analyzed in this article for Alibaba: financial quality, valuation, momentum, and relative strength.

The system has produced solid backtested performance over the long term. The chart below shows how the 50 stocks with the highest PowerFactors ranking in the Russell 3000 index performed since 1999. The backtesting assumes an equal-weighted portfolio, monthly rebalanced, and with an annual expense ratio of 1% to account for trading expenses. The benchmark is the iShares Russell 3000 ETF (NYSEARCA:IWV). 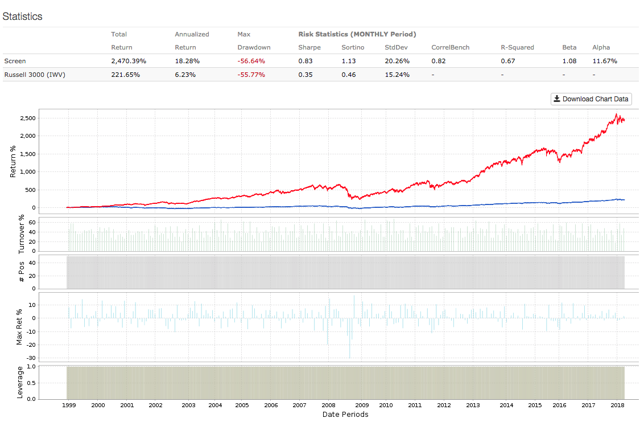 Data from S&P Global via Portfolio123

The system materially outperformed the benchmark, with annual returns of 18.28% per year versus an annual return of 6.23% for the market-tracking ETF in the same period. In other words, a $100,000 investment in the iShares Russell 3000 ETF in January of 1999 would currently be worth around $321,600, and the same amount of capital allocated to the PowerFactors system would have a much larger value of over $2.57 million.

Alibaba is one of the stocks currently recommended by the PowerFactors system, and the company gets particularly high scores in financial quality and relative strength. If statistical evidence is any valid guide, then Alibaba is well-positioned for attractive returns going forward.