Jon Bird , CONTRIBUTORI write about the new retail reality; what it means and what’s next Opinions expressed by Forbes Contributors are their own.

“I hope my company would be 100% automation someday … no human beings anymore, 100% operated by AI and robots.” That’s Richard Liu’s audacious goal, which he outlined to my colleague David Roth* in a rare, just-released interview conducted in English at the World Retail Congress in Madrid last week. 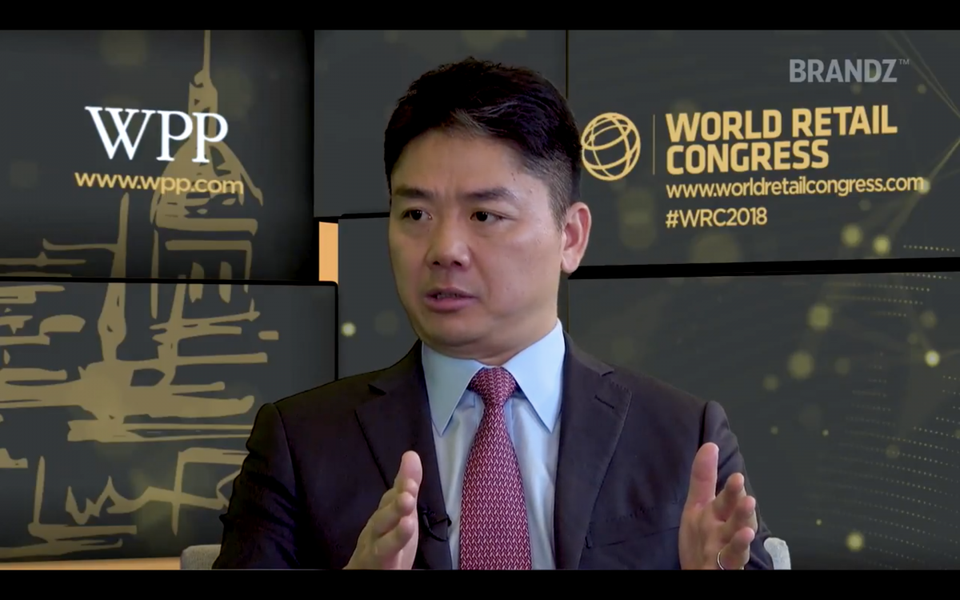 Liu is the 44-year-old founder, CEO and chairman of JD.com (JD), which is China’s largest retailer by revenue, and in the top three e-commerce companies globally. (In fact at $55.7 billion in revenue last year, if ranked alongside all U.S. retailers, JD would be just outside the top 10.)
JD is a serious player, and deadly serious about AI and robotics. The company is investing $4.5 billion to build an AI center in Guandong province, and has set up its JD-X robotics research hub in Silicon Valley, led by the ex-Senior Research Manager of Amazon Go.

Operationally, JD sees humans being removed from the retail process. Picture the near future: When a customer makes a purchase, the order will be picked by robots in a “people-free warehouse” (Liu’s term), then delivered by drone or a self-driving vehicle within 30 minutes, where the recipient will gain access to the package via facial recognition. AI technology will manage inventory and price products as well – far more efficiently than humans.
JD is already trialing robot delivery via “campus couriers”across several universities in Beijing, and is planning to build 200 drone airports in Southwest China. 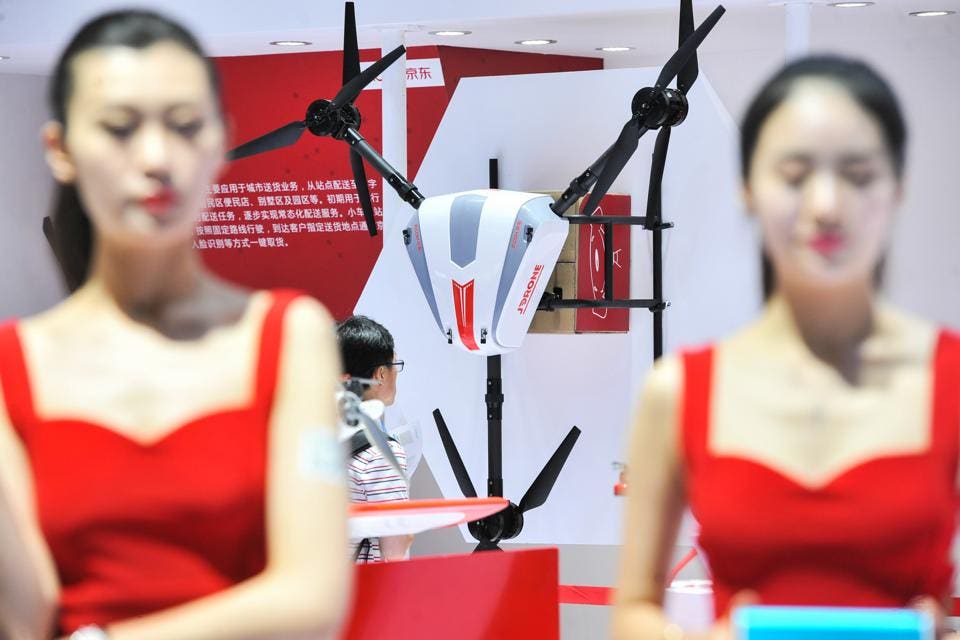 Models stand near a drone on the JD.com stand on the opening day of the Consumer Electronics Show Asia in Shanghai on June 7, 2017.  (Photo credit should read STR/AFP/Getty Images)

JD also has a view on how physical retail will be reshaped. Shoppers will enter a store, select what they need and leave – with payment controlled by biometrics (facial recognition). This interface is being tested now at JD.com’s headquarters in Beijing. JD has also recently launched a new supermarket concept where robot shopping cartsfollow the customer around the store.
Does JD’s people-free future mean that the company will be reduced to a staff of one – Richard Liu? Well, no, it’s the “boring bits” (my technical term) that will be powered by robotics and AI. There will still be a place for staff, but there will be fewer of them and their roles will be very different. “We have over 160,000 full-time jobs today. In the next 10 years, I hope we will have less than 80,000,” commented Liu. “[Jobs] will reduce in half, or we will reduce working time. People will do less work but get more pay, it will be easier, more fun and less dangerous.”
Of course, JD is not alone in embracing and experimenting with AI and robotics. Lowes has played around with “Lowebots” – store greeters and navigators. Walmart is testing shelf-scanning robots.
All-told this is not just a race for robots, but a furious competition to build platforms that can then be licensed. The world’s biggest retailers, including Amazon, Alibaba and JD are all striving to create the operating system for the future of retail. Alibaba is rolling out its vision of “New Retail”, Amazon has Alexa and “Walk In, Walk Out Shopping,” and JD is going for 100% automation. Richard Liu says that JD is “trying to use visual technology and physical technology which can connect the whole world via goods and services.”
Who will win? Who knows? But one obvious concern in all of this is that once robots take people’s jobs, will we be able to earn enough to enjoy the incredible future being created?
It’s not much of a stretch to envisage a day when your home robot will anticipate your desires and place an order with the retailer, which will then set in motion a robot chain to bring you exactly what you require at precisely the moment you want it. Which is about the time that the robots figure they don’t need us at all.
*David Roth is the CEO of The Store WPP, EMEA and ASIA. WPP is the parent company of VML, which is the author’s employer. You can watch David Roth’s complete interview with JD.com’s Richard Liu below.